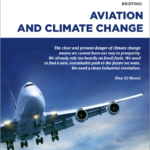 The inclusion of international flights into the EU’s carbon market was one factor that created momentum for a global, rather than regional, measure to address aviation emissions. Recognizing Europe’s potential importance in the ongoing negotiations towards a global market based measure, open letters from fifteen NGOs across Europe were sent to EU’s transport and environment/climate ministers, calling on them to step up in promoting emissions reductions from aviation – a fast-growing and polluting sector.

The International Civil Aviation Organization (ICAO) intends to adopt a global market-based mechanism to address some of the rapidly-rising emissions from the aviation sector in its 2016 meeting. In April it held five regional meetings, in Lima, Cairo, Nairobi, Singapore and Madrid, to engage interested parties that have not been deeply involved in the measure’s development to date.

The inclusion of international flights into the EU’s carbon market was one factor that created momentum for a global, rather than regional, measure. The current temporary suspension of international flights in the EU ETS gives the EU potentially a lot of influence in the negotiations, as the exclusion is depending on whether the future GMBM will have at least equivalent environmental integrity to the EU ETS for it to be acceptable to Europe. If the GMBM is deemed to lack sufficient environmental integrity, the EU will be asked to bring back its ETS measure.

However, with about one year to go until the scheduled adoption, the EU is punching below its weight at the negotiations. This is partly due to the lack of coordination between Member States, and between transport ministries, which have the aviation expertise, and environment ministries, where knowledge of carbon markets tends to reside.

Moreover, there are concerns on the overall adequacy of the ICAO’s emissions control ambition – it is currently not consistent with limiting warming to 2ºC and lacks carbon budgets for 2030 to 2050. While a fair GMBM is important and could be a source of new public climate finance, it must not replace complementary rigorous technical and operational measures, such as an ICAO CO2 standard for new aircraft.

Another essential element in tackling aviation emissions is to cut subsidies to the aviation industry in the EU, including removing the tax-free status of fuel and the lack of VAT, relics from the 1940s, as well as putting an end to subsidizing non-viable regional airports or legalizing operating aid to airlines.

ICAO estimates that fuel demand in the international aviation sector will rise from 187MT in 2006 to 461Mt in 2036. This would bust the global carbon budget and amplify the existing risks from climate change. The EU has already taken an important step by pushing for the inclusion of text in the UNFCCC process to include international aviation and shipping in the Paris deal at the end of the year. Building on this momentum, EU Member States now need to show a unified voice to push for a robust deal towards the adoption of a global market based measure under the ICAO process.