Can a robust aviation climate deal take off?

In its Assembly from 27 September to 7 October, the International Civil Aviation Organization (ICAO) is expected to agree on an offsetting scheme to address the sector’s ever growing greenhouse gas emissions. Several improvements are needed before the Global Market Based Measure (GMBM) can even be called an acceptable first step to curb emissions from aviation.

This will be the first UN market mechanism created outside of the UN Framework Convention on Climate Change. Negotiations on ICAO’s market-based measure has been, incorrectly, treated by member states as a parallel, unrelated process to the international climate talks.

Lofty climate proposals for aviation started with a potential cap-and-trade covering all emissions, before shifting towards a mandatory offsetting mechanism that would start in 2020. Unfortunately, the deal currently on the table has retreated further to an offsetting scheme that only asks for voluntary contributions until 2027.

States are coming forward with statements supporting the process, but coverage will not be known until countries publicly announce their intent to sign-up to the market measure.

NGOs have been clear about needed improvements to an ever-weakening text. Our response to the most recent draft, produced after the Friends of the President meeting in late August, demands improvements before the measure can be deemed in anyway acceptable. 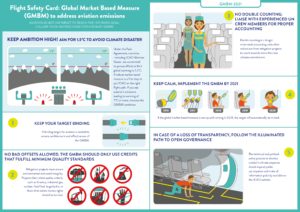 What needs to be done?

First and foremost the text cannot be further weakened by Member States. The International Coalition for Sustainable Aviation, of which Carbon Market Watch is member, has put forward 5 ways to save the GMBM:

Many things in the text will be further debated on the technical level but two strong political signals must be sent.

Firstly, states need to publicly commit to properly account for climate actions airlines will finance.  If the offsets used to achieve the GMBM goal are also credited to other climate targets, emissions will increase while countries and airlines appear to meet their pledges.

Secondly, ICAO’s measure cannot block more ambitious measures going forward. The current 2020 target is insufficient to achieve the goals of the Paris Agreement, it is therefore imperative that ambitious states and regions are permitted to go further in reducing their emissions.

Europe, in particular will most likely be quickly collecting itself post-Assembly to defend an ETS that covers all emissions from EU flights and not just those above 2020 levels.

States must sign up to a commitment that ensures environmental integrity within the new deal. You can help call on states to play their part in an online Thunderclap  (Twitter campaign) that we will take place on September 27th, ahead of the ICAO Assembly.