The International Civil Aviation Organization (ICAO) is busy developing a new market-based mechanism that will allow it to buy offsets to achieve the goal of limiting emissions to 2020 levels, despite rapid growth in the industry. In parallel, it has standards that aim to increase the fuel efficiency of aircraft. In 2010, ICAO agreed to achieve an annual 2% average fuel efficiency improvement to 2020. However, two new reports (links below) show that this goal is not yet being met, undermining the aviation industry’s need to reduce emissions.

There are cost-effective options to reduce emissions from aviation, in particular, to reduce fuel costs, but also to deploy new technologies and harmonize air traffic control systems. This is important, as simply maintaining 2020 levels through offsets is not compatible with a 2ºC-compatible emissions reduction pathway. A recent report by the thinktank International Council on Climate Transportation shows that this goal is not yet being met, undermining the aviation industry’s ability to reduce emissions. There were good improvements, of 2.6% per annum, in the 1980s, due to the adoption of new technologies and designing aircraft to be more efficient. However, progress in increasing efficiency for commercial jet aircraft declined considerably, to 0.8%% per annum in the 1990s, and worse to 0.5% per annum in the 2000s, but has picked up to 1.1% per year in the 2010s.

The authors of the report expect accelerating improvements going forward as more efficient aircraft designs are brought onto the market, but conclude that “a meaningful CO2 standard is needed to provide an extra incentive for new technology development and deployment. Despite faster fuel efficiency improvements linked to new aircraft types and higher fuel prices, manufacturers remain 12 years behind ICAO’s technology goals”. 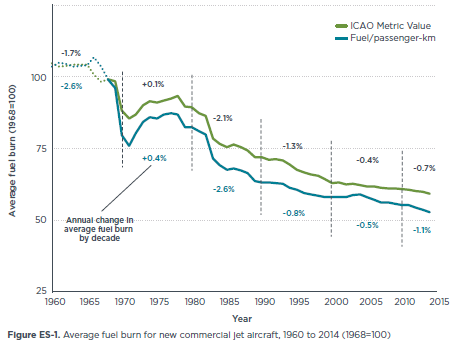 Another recently published study, by the New Climate Economy, found that there are cost-effective options to reduce emissions from aviation, in particular to reduce fuel costs, but also to deploy new technologies and harmonize air traffic control systems. This is important, as simply maintaining 2020 levels through offsets –  and ICAO may not even require adequate quality requirements to ensure that they do represent real net reductions – is not compatible with a 2ºC-compatible  emissions reduction pathway.

The NEC study found evidence for efficiency improvements: the difference in fuel efficiency of the least and most efficient US airlines was 27% in 2013. Having invested in fuel-saving measures since 2005, American Airlines has saved approximately $1.5 billion in fuel costs, and this translates also into carbon savings. Like ICCT, NEC recommends that ICAO adopt a stringent CO2 standard in 2016.

Although the GMBM will be an important step forward for the aviation industry, there is certainly a lot more scope to reduce emissions within the sector using existing technologies than has been realized to date.

A recent grading of corporations and influencers and their positive to negative influence on climate change policy by InfluenceMap gave Delta a D-, albeit with a low engagement intensity. Airbus got a D, ahead of rival Boeing’s E+. The International Air Transport Association (IATA) was given an F.