The climate summit in Paris left many negotiators who had worked for days without sleep with a sense of relief. The Paris agreement marks a major step forward to averting a climate catastrophe. But as we are heading to a 3 degrees warmer world, far from the aspirational 1.5°C goal, we simply cannot afford to stand still. Now is the time to turn the global climate deal into a springboard for more climate action worldwide. And who better than ‘high ambition’ champion Europe to spearhead this movement from words to action?

Dear members of the European Parliament,
On behalf of the Chair of the CDM Executive Board, I would like to thank you for your communication of 20 May 2015, informing us of your serious concern about project 9713: Santa Rita Hydroelectric Plant. Your letter was made available to the CDM Executive Board (the Board).
I hereby inform you that project 9713” Santa Rita Hydroelectric Plant” was registered by the Board on 2 June 2014 after undergoing a review process at the request of Board members. The issues you raise in your letter were looked at during the course of this review and it was found that the proposed project activity had complied with the requirements of the CDM, including the local stakeholder consultation process. Further, the designated national authority (DNA) of Guatemala issued required letter of approval (dated 2 July 2012) conﬁrming that the project will assist Guatemala in its efforts to achieve sustainable development. The DNA had also conﬁrmed to the Board, in the course of the review of the project activity, that the local stakeholder consultation process was carried-out appropriately.

Dear Mr Schneider and Mr Buendia,
As a Member of the European Parliament committed to the respect of Human Rights, we are writing to you to express our serious concern about the Santa Rita Hydroelectric Plant in the Dolores River in Guatemala, which was registered under the Clean Development Mechanism (CDM) in June 2014 (project number 9713).
In a meeting in March 2015 with a representative of the local indigenous communities we learnt that many of the communities that will be impacted by the project were never consulted in accordance with the CDM local stakeholder consultation requirements. As a result, the project has been, and still is, in the center of a violent conflict between the communities and the power company implementing this project.

Sharing experiences with existing climate mitigation mechanisms, such as the Clean Development Mechanism (CDM) and highlighting the severe impacts on basic human rights these UN mechanisms can have, activists from Africa, Asia and Central America met with financial institutions and policy makers involved in financing these projects. The accountability of climate finance was thereby discussed from a European perspective.

On 24 October 2014, the European Council agreed on the 2030 framework for climate and energy [1], including a binding domestic target for reducing greenhouse gas (GHG) emissions of at least 40% in 2030 as compared to 1990. To meet this target, the European Council agreed that the emissions in the EU Emission Trading System should be reduced, compared to 2005, by 43%. A reformed EU ETS remains the main instrument to achieve the emission reduction target. The cap will decline based on an annual linear reduction factor of 2.2% (instead of the current 1.74%) from 2021 onwards, to achieve the necessary emission reductions in the EU ETS. The European Council furthermore gave strategic guidance on several issues regarding the implementation of the emission reduction target, namely free allocation to industry, the establishment of a modernisation and an innovation fund, optional free allocation of allowances to modernise electricity generation in some Member States.

Brussels, 6 March 2015. Today, EU’s environment ministers presented the EU’s contribution to the international climate agreement to be finalized in Paris by the end of the year. Carbon Market Watch criticises the official contribution for the lack of detail and calls on ministers to specify measures that avoid that hot air and emission removals from forests undermine the 40% domestic emissions reduction target.

In February members of the European Parliament voted to start the reform of the EU’s carbon market by 2019, and put almost 1.4 billion pollution permits that were due to come back to the market by 2020 directly into the new market stability reserve (MSR). Unfortunately the reform does not provide a structural solution for the lacking environmental effectiveness of the EU ETS, as around 800 million surplus allowances are allowed to flow back to the market again before 2030, diluting the EU’s 2030 target by 3%. 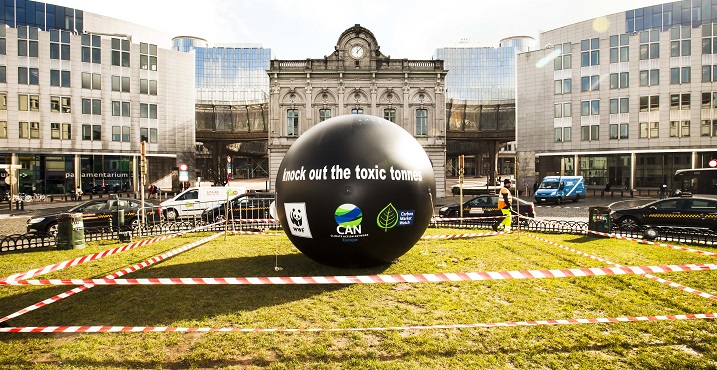 Brussels 24 February. Today the European Parliament’s environment committee took the first steps to reform the EU’s Emissions Trading System. Following intense pressure from forward looking investors and civil society, policymakers agreed to curb the total amount of pollution permits in the system that would otherwise flood the market by 2020. This is expected to result in a stronger carbon price signal in order to let the polluter pay and support climate friendly investments in Europe. Policymakers unfortunately failed to agree to a timely start of the new Market Stability Reserve which will only become operational by 2019.

On Tuesday 24 February, Members of the European Parliament will cast a crucial vote on the future of Europe’s flagship climate instrument, the EU’s Emissions Trading System (EU ETS). Failure to reform Europe’s carbon market could sink the emerging network of global carbon trading systems and have profound consequences for the success of the international climate summit in Paris at the end of this year.