Like dry water and hot snow, carbon-neutral fossil fuels are pipe dreams and marketing gimmicks that do nothing to protect the climate, a new Carbon Market Watch investigation reveals. Jonathan Crook investigates.

In case you haven’t heard, there’s a new greenwashing trend spreading like wildfire. It consists of oil and gas giants, like Shell, Total, BP, Eni, Gazprom and PetroChina claiming that their carbon-packed fossil fuels are “carbon neutral”.

Shell proudly leads the pack. Having literally and figuratively blazed ahead to start the trend in 2019, Shell has, by its own account, marketed 14 cargoes of liquefied natural gas (LNG) as “carbon neutral” as of July 2021.

The fossil fuel industry may have felt initial trepidation about the optics of such claims, but it was short-lived. It would seem that after seeing just how easily Shell got away unchallenged with repeatedly calling its polluting gas “carbon neutral” over the last two years, many other fossil fuel firms and partners felt emboldened to follow suit.

These firms are keen to claim that fossil fuels, particularly LNG, can be rendered “carbon neutral” in order to give them a facelift and even to sell, at a premium, the same exact polluting fuels with a deceptive climate-friendly label.

Now how on Earth could carbon-loaded fossil fuels become “carbon neutral”, you may wonder?

Well, the short answer is they can’t, for many reasons. Starting with the basics, fossil fuels are far from “carbon neutral” and no branding can magically make them so.

While the fossil fuel industry makes a song and dance about LNG in particular, falsely parading it as “low carbon”, “clean” or “carbon neutral”, it is none of those things. LNG releases CO2 when it is burned. And when LNG is extracted, processed and transported in pipelines and on the backs of massive ships, there are additional emissions as well as frequent leaks that release methane into the atmosphere. For the climate, methane is about 84 times more damaging than CO2 in the short-term.

Moreover, when one actually looks at these claims, which feature prominently in press releases, the lack of transparency, and of even a semblance of supporting evidence, is striking.

That’s like saying your battery-cage chicken farm sells free-range eggs because you paid an unnamed organisation on another continent to support a small-scale animal welfare programme. 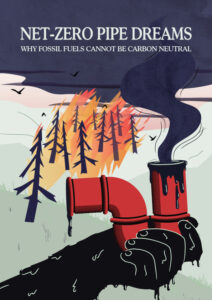 In light of the recent explosion of fossil fuels being sold as carbon neutral, Carbon Market Watch decided to investigate 18recent claims in detail.

These claims are bogus for the following reasons.

To begin with, no fossil fuel firm respects the most basic requirements to begin to even consider calling a product, let alone a fossil fuel, “carbon neutral”. The firms ignore actual mitigation measures they must take and instead buy carbon credits with a “tonne-for-tonne” offsetting mentality to purportedly undo their damage.

Most claims incorrectly assume that extremely long-term emissions can be offset with temporary storage in living ecosystems like forests. CO2 emitted from burning fossil fuels will remain in the atmosphere trapping heat for 300-1,000 years, meaning that the ecosystems burdened with “compensating” for these emissions would need to stay standing and healthy for up to a millennium.

With this in mind, it becomes obvious that no company, country, or project developer can guarantee such longevity on an intergenerational scale. Clearly, protecting and regenerating ecosystems is essential, but in practical carbon accounting terms these are non-permanent storage sites. This is especially the case when you factor in risks to ecosystems.

Living habitats are vulnerable to fire, drought, insects, disease, flooding, and logging, which can result in all the carbon stocked in these ecosystems being re-released. These risks already threaten natural systems and carbon crediting projects, and are set to only be exacerbated as the climate crisis worsens (see here, here, and here).

The firms never disclose full details about the source of carbon credits, obstructing independent third-party review to gauge credibility and quality. Many claims disclose no details or only extremely limited information, such as that the credits are from “nature-based projects”.

In addition, not a single firm publicly disclosed the price paid for its credits, raising concerns that these are extremely cheap transactions that are almost certainly at prices well below what is needed for the firm to rethink and revamp its highly polluting business model.

Moreover, no firm publicly discloses, in its claim, an estimate of lifecycle emissions for the specific fossil fuel cargo that it is calling “carbon neutral”. Setting momentarily aside the fundamental problem with “tonne-for-tonne” offsetting, any firm relying on carbon credits to offset its products’ emissions must disclose what it estimates these emissions to be. How else can one know if these corporations have accurately estimated these emissions?

On top of this lack of transparency, a third of “carbon neutral” fossil fuel claims we analysed do not even factor in emissions related to the actual burning of the fossil fuels (Scope 3 emissions). This is despite the fact that these represent the vast majority of total lifecycle emissions: as much as 70% for a typical LNG cargo.

Our investigation clearly reveals that murky claims of “carbon neutral” fossil fuels are anything but neutral, neither in their impact on the climate nor in the motivations behind the claim. They are uniformly misleading, vague and non-transparent.

In order to stop the overt greenwashing exhibited in “carbon neutral” fossil fuel claims and to scale up climate action, Carbon Market Watch recommends the following lines of action to be taken by a range of stakeholders.

If fossil fuel firms continue to buy carbon credits, these categorically cannot be counted towards reaching their mitigation target or to making bogus claims about their products. Moreover, instead of dubious “tonne-for-tonne” offsetting, these firms must adopt the “contribution” claim model, whereby they would still buy and retire credits but they would not claim to have reduced or neutralised their own emissions in doing so.

Policymakers and lawmakers must proactively design and implement regulations and legislation to prevent such greenwashing, including through redefining advertising standards, and to ensure companies can no longer legally make erroneous “carbon neutral” fossil fuel claims.

Civil society organisations and the public should continue to apply pressure on polluters and policymakers and legislators, including by scrutinising carbon neutral claims, especially for fossil fuels, and calling out any greenwashing. As this report shows, it is possible to scrutinise such claims by using clear, consistent and accurate criteria for environmental integrity and transparency.

There will certainly be more “carbon neutral” fossil fuel claims in the years to come, unless the recommendations we’ve presented are taken up quickly. It is high time for oil and gas companies to abandon their fossilised ways and to stop obstructing the path to true climate solutions.