A recent Carbon Market Watch webinar discussed the upcoming revision of the Industrial Emissions Directive in the framework of the European Green Deal. 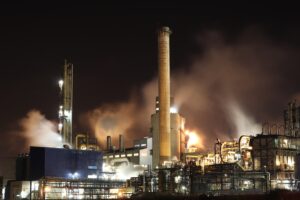 Achieving the goals of the European Green Deal (EGD) will entail driving down greenhouse gas emissions as well as achieving zero pollution and a non-toxic environment by 2050. The upcoming revisions of policies that regulate energy and resource-intensive industries are an opportunity to fulfil this objective.

One of the largest directives regulating industrial pollution, the Industrial Emissions Directive (IED) is among the main tools to prevent all environmental impacts from industrial activities.

The IED is a key law to tackle industrial pollution and has played an important role so far. It regulates pollutants to air, water and soil and defines emission limits that industrial installations have to respect to be able to operate.

To bring it in line with the European Green Deal objectives, its criteria must be tightened and its scope expanded. Our recent webinar discussed how to do this.

These industries are also responsible for emitting other pollutants such as NO2, SO2, dust, and others, which are harmful to health and generate huge related costs. In 2012, the top five air pollutants (excluding GHGs) alone emitted from some of the same installations generated an annual health cost of up to €189 billion.

The revision of the IED is an opportunity to strengthen it so that it achieves better results, contributing to climate neutrality and zero-pollution goals. According to Christian Schaible, Policy Manager for Industrial Production at the European Environmental Bureau, there are several crucial elements that need to be addressed. First of all, the current directive does not provide a strong incentive to installations to invest in innovation and increase their environmental performance. This is due to the high level of emissions that installations are still allowed to produce despite the fact that emissions limits should be defined based on the best available techniques (BATs). The current definition of BATs as the “most eff­ective and advanced techniques that are available at scale, feasible to implement and yield the best possible environmental outcome” is vague and prone to lead to weak implementation. Therefore, there is the need to redesign the framework, redefine how BATs are determined and lower emission levels to reach industrial decarbonisation and zero pollution faster.

Another shortcoming that Schaible pointed out is the abuse of derogations by member states. Member states are in charge of granting permits to each firm and thus are the ones enforcing the law’s requirements. However, according to article 15.4 of the IED, member states can decide to set less strict emissions limits if applying them would lead to disproportionately higher costs compared to the environmental benefit. Such power has been often used without robust justifications and based on biased cost-benefit assumptions to benefit the industry at the expense of the environment. The revision of the IED can correct this by removing such derogation or at least by defining stricter boundaries and circumstances in which derogations can be applied.

Finally, Schaible stressed the importance of increasing transparency and access to information in the permitting procedure. In the current framework, access to information on environmental permits and public participation is limited. In the revision of the IED, it will be important to review the rules on transparency, including a real-time publication of emissions data, and improve stakeholder consultation processes.

The IED should also be used in conjunction with the EU’s Emissions Trading System (EU ETS). Both pieces of legislation regulate industrial emissions but currently use different approaches and cover different pollutants.

While the IED aims to prevent pollution from industrial activities and covers all relevant environmental impacts, it does not address greenhouse gas pollution and climate impacts directly.

Instead, the regulation of greenhouse gas emissions is left to the EU carbon market (the EU emissions trading system – EU ETS). Greenhouse gas emissions were excluded from the scope of the IED with the introduction of the market-based approach of the EU ETS. Therefore, EU governments do not set limits on these emissions when issuing environmental permits under the IED. For the same reason, it is also optional for governments to set binding energy efficiency standards based on performance on those installations that are covered by the EU ETS.

These limitations are counter-productive and incompatible with the integrated approach of the IED to prevent (all) pollution at source. They also provide little incentive to industries to invest in more environmentally friendly processes and reduce their greenhouse gas emissions. In light of the urgent need to tackle the climate crisis, this oversight and shortcoming must be corrected.

Ruggiero also stressed the importance of introducing GHG performance standards to achieve a complete coal phase-out in Europe by 2030 and industrial decarbonisation in line with achieving climate neutrality before 2050.

The proposal to revise the industrial emissions law is expected in the second half of the year. While this is a regular update as the EU standard legislative process dictates, it takes place in a new political context of the EU Green Deal. It is imperative to ensure that the law not only contributes to its zero environmental pollution goal but also to the Green Deal’s objective of making Europe climate-neutral.