Time to steer shipping into the EU carbon market

The UN shipping body’s failure to agree on immediate climate measures means the incoming European Commission President, Ursula von der Leyen, must make good of her promise to include the maritime sector under the EU Emissions Trading System (EU ETS).

The International Maritime Organisation (IMO) last week once again postponed decisions on concrete and immediate measures, such as reducing the speed of ships, to address the sector’s climate impact.

Last year, the 173 member countries of the IMO agreed that the sector would aim to decarbonise by 2050, and committed to implementing immediate measures to help reach this goal.

Reducing speed by just 20% would reduce greenhouse gas pollution from ships by up to 34% and black carbon emissions – the second most important pollutant from shipping after CO2 – by 20%. The CO2 savings alone are equivalent to closing down 48 coal-fired power plants.

The European Union has said that it would include the sector in the EU carbon market – which regulates emissions from the power sector, industry and airlines – by 2023 if the UN agency was judged to have made insufficient progress. The transport Commissioner-designate Adina-Ioana Vălean repeated this in the European Parliament just a day before the IMO meeting ended last week.

If there was ever any doubt, it should now be clear that the IMO is not doing enough.

Shipping emits almost a gigatonne of greenhouse gas pollution a year, which is more than all European road transport emissions.

If left unchecked, maritime CO2 emissions could increase by 50-250% by 2050. This scenario is not compatible with objectives laid out under the Paris Agreement, nor with the IMO’s own climate goals.

According to Transport and Environment, without action shipping will add cumulatively around 80 megatonnes of CO2 to EU carbon pollution between now and 2030. This amount is comparable to the total annual emissions of Austria.

Carbon pricing as part of the climate tool pack

The IMO is also considering carbon pricing as a mid-term climate measure for the sector. But let’s be clear on one thing: seen that the shipping body’s decision-making seems stuck in the slow lane, the EU should not wait for this process to move forward. Instead, it must show international leadership to inspire the IMO and others to act.

If the IMO was to introduce carbon pricing of its own, it should complement a broader set of short-term measures, such as the already mentioned slow-steaming. It should be designed in a way that is environmentally effective but that does not put an undue burden on less developed countries. The raised revenues should be used to support in-sector research and development in order to achieve further emissions cuts and to compensate the least developed countries for any negative impact on their development.

The climate crisis is the defining challenge of our times. A zero-carbon future is possible, but it requires action from every part of society. By adopting its climate goals, the IMO has shown that it understands this. But its slow progress in turning words into action means that the EU needs to step up and put a price on pollution from ships. 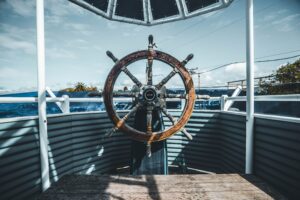