We have launched a social media appeal to ask civil society and citizens to support our end the CDM campaign on Twitter, Facebook and Linkedin from 09:00-10:00am Tuesday 4 December 2018 @COP24 See here

At this moments we’ll be sending an international open letter to UNFCCC Parties calling on them the End the CDM in 2020.

At the UN climate negotiations in Katowice, Poland in December, Parties to the UNFCCC will engage in discussions to decide on the fate of the Clean Development Mechanism (CDM) – a controversial carbon market which has been in operation for over a decade. At COP24 Carbon Market Watch, together with civil society groups from around the world (see open letter) will be urging negotiators to end the flawed offsetting mechanism when the Kyoto Protocol period finishes in 2020 and ban the use of the billions of junk credits it will have generated so far.

The CDM was set up to allow developed countries to reach their emission reductions targets at lower cost, but since 2005 this mechanism has been plagued with flaws and has failed to reduce emissions. In some cases, it even led to an increase in emissions. The mechanism has also supported projects which infringed on Human Rights, and now represents a real and sizeable threat to the success of the Paris Agreement.

Countries with vested interests in the continuation of the scheme, will continue to defend its credibility vigorously, but future reliance on these ‘junk credits’ to meet emission reduction targets would jeopardize the entire global effort to reduce the impacts of climate change. This was underscored in an 2016 Oeko Institute report for the European Commission that found that nearly three quarters of all credits which could be supplied before 2020 are not likely to be additional (ie the underlying emission reductions would have happened anyway even in the absence of the market). 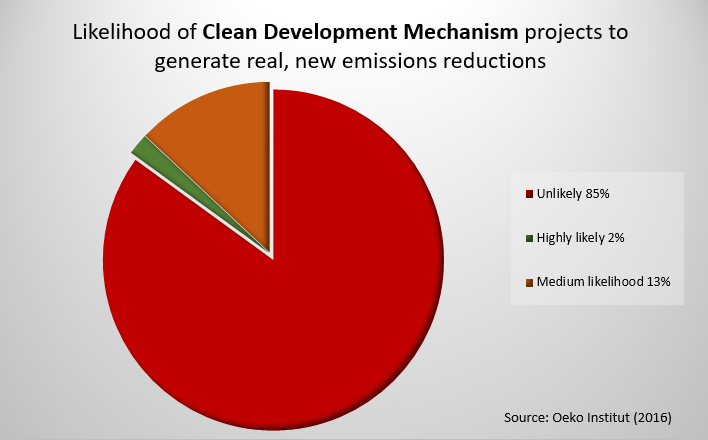 Informing the public about the risks of this mechanism, is therefore crucial in raising awareness about the facts that surround the CDM and the potential damage its continuation could have on global climate ambition. Indeed, while countries increase their ambition by setting higher climate targets under the Paris Agreement, these commitments will effectively be rendered meaningless if they are met with CDM credits which represent no actual emission reductions.

Carbon Market Watch is currently coordinating a widely supported international civil society open letter which will be sent to UNFCCC officials, calling on them to END the CDM and not to rely on CDM credits to meet the Paris Agreement’s emission reduction target.

New markets are currently being negotiated under the UNFCCC, and it is essential that this process receives media scrutiny in order to raise public awareness about the risk of repeating past mistakes.

Why is it urgent now?