18 June 2015, Brussels. As the European Commission is consulting on options to cost-effectively reduce emissions in sectors not covered by the EU ETS a new study finds that a wrong design could undermine reduction efforts in the transport, agriculture, buildings and waste sectors by three quarters until 2030. This is because potential intra-EU offsetting options currently under discussion – for example allowing carbon permits from the EU ETS or using forestry offsets – do not represent real emission reductions.

To implement the EU’s 2030 climate target in sectors not covered by the EU ETS, the European Commission is expected to propose new legislation by early 2016. Higher 2030 climate ambition and a decision not to make use of international carbon offsets has resulted in a search for alternative intra-EU options to reduce emissions cost-efficiently – so-called flexibilities.

A new study by the Öko-institut finds that using carbon permits from the EU ETS to comply with national non-ETS targets for the transport, agriculture, buildings and waste sectors and allowing temporary forestry offsets to reduce permanent fossil fuel emissions may lead to a reduced reduction effort in these sectors of 15% and 67% respectively in the 2021-2030 period.

Moreover, the study finds that these flexibility options are problematic because they don’t represent real emission reductions, would undermine the EU 2030 climate targets and ultimately increase overall EU emissions by 28% in the 2021-2030 period.

In the case of forestry offsets, the study finds that they don’t represent real emission reductions for a number of reasons, such as the fact that carbon stored in trees and soils is reversible and hence cannot replace permanent emissions. The study further finds that using ETS permits for reduction targets in non-ETS sectors will not reduce ETS emissions up to 2030 while at the same time lowering necessary reduction efforts in non-ETS sectors. 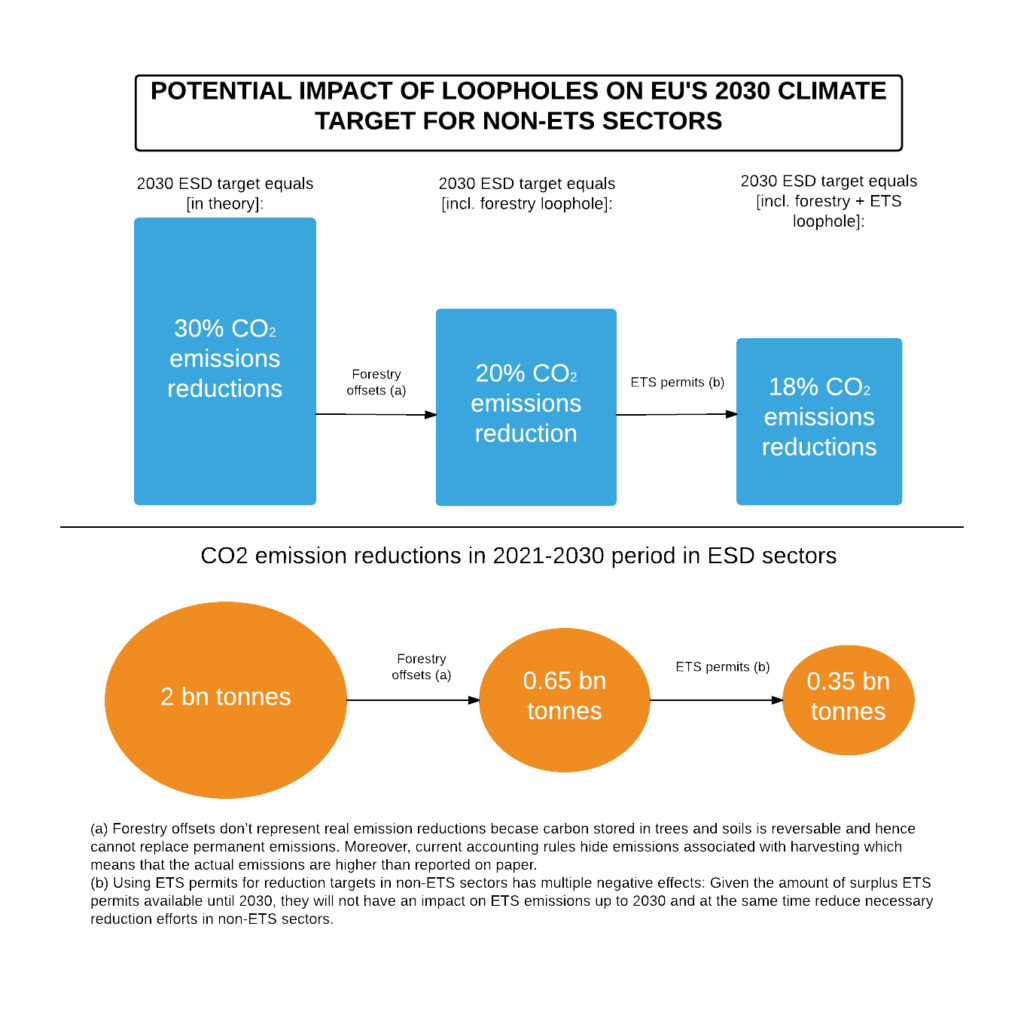 “Loopholes disguised as flexibilities could reduce non-ETS reduction efforts by up to 80%, or in other words almost wipe out the EU’s 2030 climate target for these important sectors”, commented Femke de Jong, EU climate policy advisor at Carbon Market Watch “As Pope Francis’ Encyclical warns against using carbon credits as a ploy to maintain excessive consumption, this is not the time to introduce new loopholes to avoid much needed emission reductions.”

On the other hand, the new study shows that avoiding international offsets and increasing domestic mitigation efforts before 2020 when implementing the existing Effort Sharing Decision can lead to 1 billion tonnes of CO2 emission reductions during 2021-2030.

“Rather than wasting money on international offsets to meet their 2020 targets, EU countries should invest in domestic mitigation measures now, which will make achieving the 2030 targets easier and can avoid the need for bad flexibility options”, added de Jong.