The EU carbon market has helped drive down carbon pollution from Europe’s power sector but has failed to do the same for heavy industries such as cement, steel and chemicals. A part of the reason is the free allocation of pollution permits, which means that the industry has little incentive to clean up its act. While publicly embracing Europe’s new climate ambition, our new report finds that the same companies continue to push back on any meaningful reforms of the carbon pricing scheme.

While seeing some successes in driving down emissions from producing electricity, the EU carbon market has provided a very weak framework for reducing carbon pollution from sectors that consume much of this energy, such as steel, cement and chemicals. 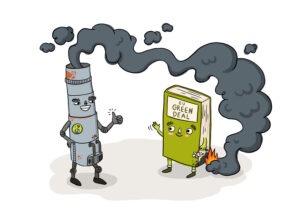 The EU Emissions Trading System (EU ETS) revision, expected to kick off in July 2021, is a chance to bring these sectors in line with Europe’s new higher 2030 climate targets and Paris Agreement objectives.

Although stronger climate laws have significant public support, certain heavy polluters continue to push back against any meaningful reforms.

Our latest publication “Survival guide to EU carbon market lobby: debunking claims from heavy industry” scrutinises the industry’s claims and talking points, analysing their influence on the processes of past and upcoming revisions of the EU ETS. As a basis, we used position papers and submissions to the European Commission’s public consultations on the topic in 2015 and 2020 from the chemicals, steel and cement sectors.

A combination of techniques to draw attention from the real issue – driving down emissions, and ensuring the polluter pays – have been used: diverting responsibility, using the Covid-19 pandemic as a pretence for clinging onto free pollution permits and only promoting technological solutions with minimal regulatory intervention required to transition these sectors to zero.

A striking imbalance, 70% of respondents to the recent public consultation on the new EU ETS rules were from the private sector in comparison to just 10% being from NGOs.

It’s important lawmakers recognise that the majority of stakeholders involved in the process are energy-intensive industry lobbyists with a vested economic interest. It is imperative this climate law review benefits all citizens, not just a handful of large polluters.

One of the largest industry lobby groups is The Alliance of Energy Intensive Industries (AEII) which represents over 30,000 companies engaged within the steel, cement, chemicals and other energy-intensive industries within the EU. Despite publicly claiming their goals to be fully aligned with the Paris Agreement, this alliance and their members focus to ensure that the implementation of the EU Green Deal would not require them to reduce their own greenhouse gas emissions, nor make them pay for their carbon pollution.

A mismatch between longer-term goals and short-term action

Lobby groups in energy-intensive industries, such as the AEII, publicly support EU climate neutrality by 2050. However, at the same time, they claim that the revision of the EU ETS will negatively affect their businesses. But to hit short and longer-term climate goals, action must happen now, not when the industries feel it is the right time (which will never come…).

Contrary to emissions saved as a result of phasing out hard coal and lignite, carbon pollution from the most resource and energy-intensive industries has barely decreased. Yet those within the industry continue to shift the burden to the power and other sectors. Cement, chemicals and steel industries are asking for more relaxed measures at least until the end of the decade, while they call for more action to reduce emissions in the electricity, buildings and transport sectors. This means citizens would be left to pick up the tab, while large polluters are let off the hook.

To achieve climate neutrality by 2040, in line with Europe’s fair share under the Paris Agreement, it is clear clean breakthrough technologies will be required. This is especially the case for energy-intensive industries. The EU ETS Innovation Fund was set up to provide funding for innovation in CCS, renewable energy technologies, and low carbon processes in carbon-intensive industries through revenues from the ETS. Its funding capacity amounts to an estimated 20 billion euros in the coming decade. The value of the emission allowances that will be handed out for free under the so-called carbon leakage measures amounts to over 300 billion euros, 15 times more than the finance available for innovation.

While industries are very vocal about their need for continued public funding support, they are yet to make it clear how they intend to spend these extra funds or even where emissions reductions could come from. Energy-intensive industries are calling for regulation to not get involved in their shift to cleaner production. But when revenues are generated and redistributed back into the industry for decarbonisation, both regulation and technological progress are working in tandem.

The possible carbon border adjustment mechanism (CBAM) should solve the hypothetical issue of companies migrating production abroad due to increased costs in Europe as a result of more stringent climate policies (carbon leakage). Therefore, if it is introduced, the protection it provides should mean heavy polluting industries are no longer entitled to get free allowances.

The continued giving out of 43% of allowances for free, represents over 300 billion euros at today’s carbon price. Free allowances represent a market failure – the external cost of carbon is not internalised by the industry.

Auctioning allowances raises revenues that can be reinvested into clean industrial and innovative technologies. Therefore, free handouts of pollution permits effectively have a double negative impact.

While the power sector has been encouraged to slash emissions, energy-intensive industries have been exonerated. Despite publicly embracing climate goals in the past, the industry lobby has continued to push back. Lobbyists argue these industries should be let off lightly in the reforms, claiming other sectors need to take responsibility first. In the last EU ETS revision, the imbalance of the political influence between the industry lobby and civil society organisations led the majority of EU lawmakers to grant exemptions to energy-intensive industries and undermine the polluters pay principle. These mistakes can now be corrected. The upcoming revision of the EU ETS is a crucial opportunity to bring these industries in line with Europe’s climate goals and the Paris Agreement.

To tackle the climate crisis, drastic reductions are required across every sector. A strong and fair EU carbon price across the board will ensure the right incentives are in place to make that happen.