The lawmaker in charge of the EU Climate Law at the European Parliament proposes that the EU adopts a 65% emission target for 2030 and carbon budgets in line with the latest scientific data. She also calls on all EU governments to endorse the target and for the EU to ensure that aviation and shipping do their share of climate action.

In February, the European Commission presented its proposal for the EU Climate Law, a key element of its flagship initiative the European Green Deal. The Climate Law makes it legally binding for the EU to become climate-neutral by 2050 and increases the EU’s 2030 climate target.

The Swedish lawmaker Jytte Guteland is in charge of steering the proposal through the European Parliament. She presented her draft report last Friday. Below we analyse four key elements of her proposal.

Guteland proposes to raise Europe’s climate target for 2030 to 65%,  “in line with what scientists say is needed to avoid catastrophic climate change”.

In order to do its fair share of climate action under the Paris Agreement, Europe needs to become climate-neutral by 2040. The heads of state have agreed to reach this goal by 2050.

But we don’t just magically become climate-neutral in 20-30 years. What happens in the short term is key and for that, we need ambitious intermediate targets.

By proposing a significantly higher 2030 target and calling on the Commission to review all relevant legislation to make this target achievable, Guteland acknowledges the importance of setting a clearly charted pathway towards climate-neutrality.

Aviation and shipping must do more 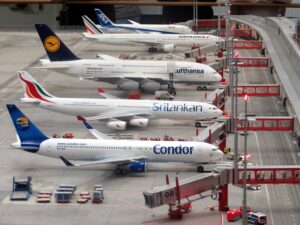 Planes are grounded due to the coronavirus pandemic, contributing to the current drop in emissions, but this is likely going to be short-lived. As soon as economic activities pick up again, so will pollution levels.

Achieving climate neutrality requires all economic sectors, including aviation and maritime transport, to reduce their emissions to close to zero, writes Guteland, adding that the polluter pays principle should be a key factor in that regard. We agree!

She asks the Commission to evaluate the options for aligning emissions from aviation and maritime transport with the 2030 target and the 2050 climate-neutrality objective in order to reduce these emissions to net-zero by 2050 at the latest.

As far as the legislation goes, a good place to start is to make airlines pay fully for the pollution permits under the EU carbon market.

Furthermore, governments, either at the EU or national level, must end the sector’s preferential tax treatment for which there are simply no grounds in the 21st century. Unlike other, more sustainable transport sectors, airlines in Europe do not pay tax on fuel nor a VAT on flight tickets.

When it comes to addressing carbon pollution from shipping, the European Commission has pledged to include the sector under the EU carbon market in the context of its upcoming revision. This is paramount, as global talks at the UN shipping agency are moving a snail pace – something that we cannot afford in the face of a climate breakdown. Even better, the European Parliament doesn’t want to wait for another year. Lawmakers are considering using a law meant for monitoring shipping emissions to start regulating them by bringing them already under the EU carbon market rules.

Carbon budget to keep us on track

The lead lawmaker proposes that the EU adopts a carbon budget, broken down by economic sectors. According to Guteland, this would increase the transparency and efficiency of the functioning of the EU climate measures. In fact, such a carbon budget with sector-specific information is something that the European Commission should have included already in the recent EU industrial strategy.

A carbon budget sets out the remaining quantity of carbon emissions that we can still emit while staying within the Paris Agreement goal of limiting global heating to 1.5. Degrees.

This would be an important tool to make sure that we stay on track and, as pointed out by Guteland, that the EU climate measures are in line with the most up-to-date scientific evidence and the EU’s Paris Agreement objectives.

Guteland emphasis that reaching the 2050 goal at the EU level is not enough. Every single member state must commit to this target and take the necessary steps to reach it.

So far, Poland as the only EU member state has refused to commit to the target.

Guteland also reminds that 2050 is not the end of the game. After 2050, the EU and all its member states must continue to reduce emissions so as to ensure that removals of greenhouse gases exceed emissions. This is called reaching “net-negative emissions”.

During these uncertain times, it is encouraging to see that the lead lawmaker at the European Parliament has a clear understanding of the science and the importance of the EU short-term climate action. We urge other decision-makers to follow her lead and embrace bold and urgent climate action.

After all, it is also the only viable and sustainable way out of the economic upheaval caused by the coronavirus pandemic.

Going back to business-as-usual is not an option. Business-as-usual will not take us to climate-neutrality and staying below 1.5 degrees. It will take us to global heating of about 3-4 degrees and a climate disaster. Only a recovery based on sustainability, equality, justice and a green transition will ensure a safe world for us and for future generations.