Today, June 7, dozens of NGOs based in different EU Member States are participating in a Day of Action on the Effort Sharing Regulation by sending a letter to their governments, calling on them to push for an ambitious #EUESR. 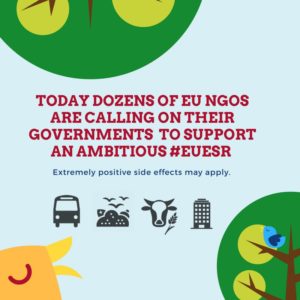 The Effort Sharing Regulation is Europe’s largest policy tool to reduce the climate impact of sectors that are not covered by the EU Emissions Trading System (ETS), namely transport, building, agriculture, and waste sectors. The proposal for the ESR for the period between 2021 and 2030 is currently being discussed by the EU Member States and the European Parliament. The law can play a crucial role in the decarbonization of our economy and an improvement of our wellbeing.

Unfortunately, the current #EUESR proposal is not consistent with the long-term commitments made in the Paris Agreement, which would require a more substantial overhaul of EU climate and energy policies. Following President Trump’s decision to withdraw from the Paris Agreement, current discussions on the #EUESR are a key opportunity for the European Union to show its international climate leadership, by raising the ambition of this law.

This is why, ahead of the June 19 EU Environment Council meeting, CAN Europe, Birdlife Europe, Carbon Market Watch, the European Federation of Organic Agriculture Movements, Fern, Transport and Environment & Zero Waste Europe called their national members to act and participate in the day of action on the EU ESR.

Please see their letters below:

EU letter to the Malta Presidency (in English)

For more information on the ESR and on how each sector can reduce its emissions, please see the links below: 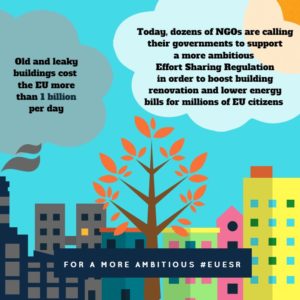 A carbon market for buildings must be constructed on solid foundations

October editorial: COP26 and the rise of the climate inactivists