The European Parliament’s environment committee has nominated Julie Girling from conservative group ECR to lead their talks on aviation’s role in the EU’s Emissions Trading System.  Discussing the European Commission’s recent proposal to continue the exclusion of international flights from the EU ETS, Ms Girling urged colleagues not to let Europe slip back on gains already made to curb the sector’s growing climate impact.

Last year, the International Civil Aviation Organization (ICAO) agreed on an offsetting scheme to address emissions from international aviation. The Carbon Offsetting and Reduction Scheme for International Aviation (CORSIA) will enter into force in 2021, with a voluntary phase until 2027. Following the ICAO decision, the European Commission proposed to continue exempting international flights from paying for their pollution under the EU’s Emissions Trading System (EU ETS). The system continues to apply to flights within Europe.

The proposal means that emissions from international aviation flying to and from Europe remain unaddressed until the ICAO offsetting scheme takes off.

The ramifications of this decision for Europe’s climate policies are discouraging: the surplus in the EU ETS is estimated to increase by 260 million tonnes. Current ambition to reach the 2030 targets is undermined as the original target assumes that airlines have to pay for the pollution on all outgoing flights leaving the EU.

Currently the EU ETS covers 35% of total international aviation emissions, but the proposal reduces this coverage by 27% to only 8% until at least 2021. 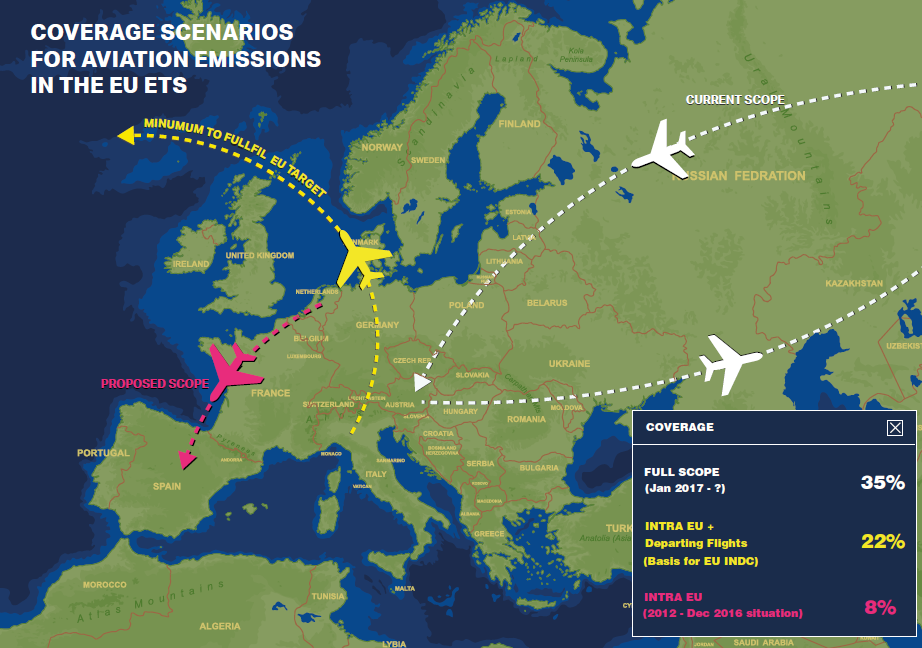 What should Europe do?

To protect the EU’s climate targets, international flights should be included in the EU ETS until the CORSIA’s effectiveness can be determined. In the event that scope does not change this would require a drastic increase in ambition for flights currently covered by the system. A revision of the global scheme should take place in 2019, to determine whether its environmental and social integrity are at least equivalent with the EU ETS to replace flights covered by the European policy.

Two weeks ago, Carbon Market Watch and Transport & Environment organised an event to analyse the Commission’s proposal and to discuss the way forward.

Different stakeholders naturally have different views on the proposal itself, but as Ms Girling, who moderated the event, summed up: what is clear is that we cannot swap our current EU ETS rules for a global measure that is far less effective. Europe must progress on climate action.