In the past few months, carbon intensive industries have ratcheted up their efforts to convince policymakers that ‘real’ data should be used to assess how many free pollution permits to give out under the EU’s carbon market rules. Carbon Market Watch also values the use of accurate, up-to-date information in the debate on the EU Emissions Trading System (ETS) reform. We, therefore, checked two recent claims by the industry.

ArcelorMittal: Pollution permits are our property – even when they were wrongly allocated

Verdict by the advocate general of the Court of Justice: not true.

In 2012, ArcelorMittal closed its Schifflange site in Luxembourg but still received almost 81,000 carbon permits for free in that year. The company received these free carbon permits, because it was late in notifying the Luxembourg authorities about the plant’s upcoming closure.

The Luxembourg authorities therefore demanded that the world’s largest steel producer give back all of its unused allowances from 2012. ArcelorMittal refused to do this, claiming that the pollution permits it had mistakenly received for free were the company’s property, and demanded compensation for having to return them.

In June 2016, Ecofys -commissioned by steel association EUROFER- published an updated assessment of the carbon costs for the steel sector in Europe.

The report comes to the conclusion that the steel sector will face €34 billion in direct and indirect carbon costs in the 2021-2030 period.

This led steel association EUROFER to claim that the EU ETS reform poses “an existential threat” to the industry. Carbon Market Watch has looked in detail at the Ecofys study and found several inconsistencies that would, if correctly taken into account, significantly reduce the cost estimate.

Furthermore, while companies use discount rates to take into account the time value of money, the Ecofys study only looks at the nominal costs, thus failing to discount future earnings with a discount rate. It thereby overestimates direct and indirect costs. 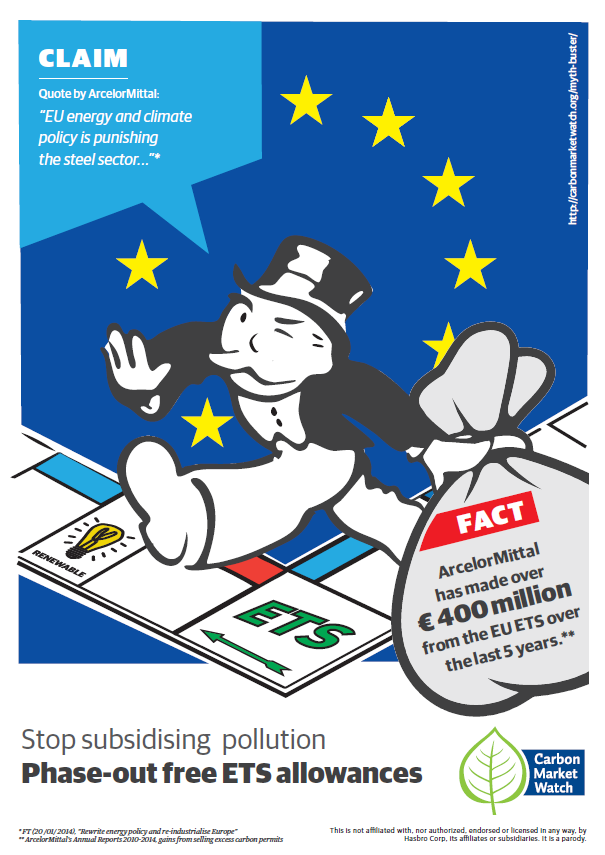 The study does not take into account the current surpluses and profits. A recent study by CE Delft finds that the steel sector has so far made €8 billion profit from the EU ETS, of which over €1 billion gains from excess carbon permits. These profits were made because industry received too many free carbon permits than it actually needed. While the Ecofys study attempts to analyse the current surplus of emission allowances, it applies unrealistic assumptions in doing so, (such as a 1.15% annual production growth rate, and an inconsistent treatment of waste gases) to arrive at zero surplus allowances by 2020.

Another inconsistency is related to the cost-pass through rates. According to recent studies, the steel sector has passed through a minimum of 55% of the carbon “costs” to their consumers, even though they received 100% of emission allowances for free. The Ecofys report does not take these rates into account, therefore accentuating (indirect) costs while diverting attention away from windfall profits.

The report also uses an approach for waste gas transfers that is inconsistent with the EU ETS directive. Correct interpretation of the legislation would further reduce the carbon cost estimate. The combustion of these waste gases produce more carbon emissions than the combustion of natural gas. To compensate power producers for these additional carbon costs compared to the average fossil fuel, steel companies might transfer emission allowances equal to the difference in carbon content of waste gases vis-à-vis natural gas to the power companies. The Ecofys report however assumes that steel companies compensate power producers for the total carbon content of waste gases, thereby overstating the carbon costs for the steel sector.

The actual costs for the steel industry from the EU’s emission trading system could therefore be less than half of what industry claim in this study. The European Commission’s own analysis shows that the steel industry will not face any costs from the EU ETS in the next period, but instead make €13 billion profits.

Of course the overall objective of the carbon market is to implement the polluter-pays principle by putting a price on carbon. The cost of carbon emissions, when not shouldered by the polluters themselves, will ultimately fall on society, presenting “an existential threat” to our economies at large.