Putting a price on pollution in Europe’s largest climate instrument

The polluter-pays principle is supposed to promote less polluting habits, including greenhouse gas emission reductions. However, carbon pricing cannot deliver its intended results by itself. To fully exploit its potential to speed up the decarbonisation of Europe, carbon pricing must be framed in an overall supportive policy context.

The Effort Sharing Decision (ESD) covers almost 60% of the EU’s carbon emissions from the agriculture, transport, building’s heat consumption and waste sectors. Currently, this climate policy sets out annual emission targets for each Member State to achieve an overall 10% emission reductions by 2020. This summer, the European Commission will propose a revised Effort Sharing Decision for the post-2020 period with the aim to achieve a 30% cut in emissions by 2030. It is up to each country to design how it will meet its ESD climate targets. 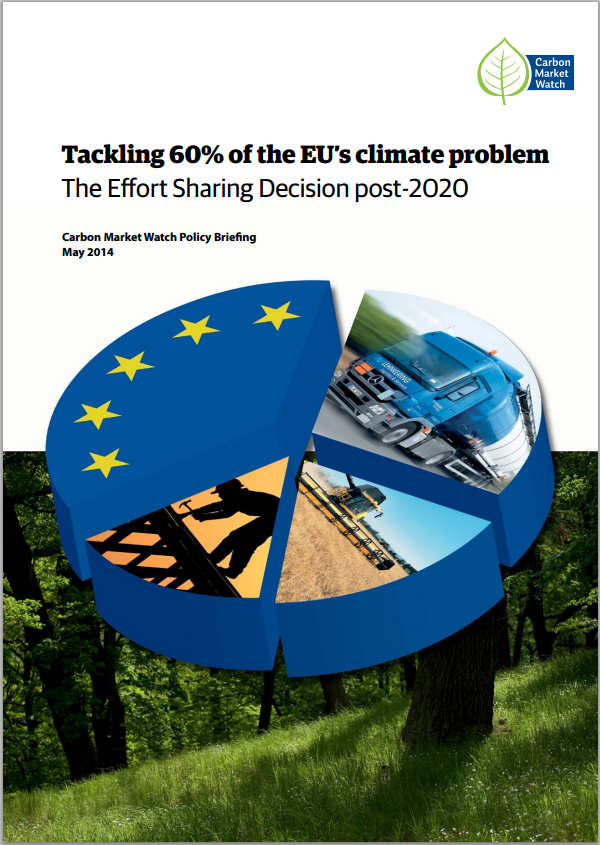 At the moment, carbon pricing measures are not delivering what they promised. The EU and its Member States should learn their lesson, and frame any policy that puts a price on carbon emissions within a supportive policy mix, if they are serious about decarbonising the EU’s economy.

What carbon pricing mechanisms are there in the EU?

The most famous form of carbon pricing at EU level is the Emission Trading System (ETS). A carbon market in which power, industry and aviation companies must surrender enough carbon permits to cover all of their emissions each year. The EU ETS suffers from a huge oversupply of carbon permits, resulting in a price too low to induce any market-led change.

Despite its shortfalls, some are calling for the introduction of sectors such as transport or heating into the EU ETS. Doing so would shift the responsibility of reducing emissions from governments to private actors. Transport and buildings’ sectors have particularities that make them unfit for inclusion in this sort of carbon market: other EU and national policies (Energy Efficiency, Fuel Quality Directive, fuel taxation) that are more effective in reducing emissions would be undermined, and incentives for decarbonising them would be reduced.

There are more mechanisms available to introduce the polluter-pays principle in the Effort Sharing sectors than incorporating them into the EU ETS, and include national carbon taxes, trading of permits, and auctioning of emission permits.

Member States already use carbon pricing in their policy mix to reduce emissions in the Effort Sharing sectors. These can include taxes on carbon, energy or transport fuels. Pricing carbon through taxes is an important tool to help Member States reduce emissions nationally, incentivize consumers and producers to reduce their energy use, and provide governments with public funds.

As part of the ESD, Member States are granted a number of emission permits every year; if they manage to emit less, they can trade (sell) their surplus permits with other Member States that run into a shortage. So far it remains unclear how these bi-lateral deals will look like, as no one has needed to use this mechanism yet. Open questions remain regarding the price these traded emission permits will have, and whether it will be high enough to encourage Member States to reduce emissions at home.

A carbon price could also be set by auctioning a share of the total emission permits available every year. Member States that need extra allowances to meet their targets would need to buy them from the European Commission. It is estimated that the auctioning of only half of the annual reductions could generate over €9 billion[1] during the 2021-2030 period.

Carbon pricing is not the magic bullet…

… but is useful in the policy toolbox. Carbon pricing makes the costs of carbon emissions evident. Revenues from EU carbon pricing policies could be directed towards a mechanism that funds cost-efficient projects specifically designed to unlock the EU’s emission reduction potential, for example for the deep renovation of large building stocks or public transport infrastructure. Such a project based mechanisms could provide the seed funding necessary to engage the private sector and secure a real low-carbon economy transformation. Putting a price on carbon enhances the efficiency of the overall policy mix, especially when supported by appropriate complementary policy[2].

Trilogue triangulation: Mapping the positions of the EU institutions on carbon market reform

As the EU institutions enter into a three-way trilogue on the reform of the Emissions Trading System, we present you with this

As the signs of climate breakdown become unmissable, we must not sacrifice our carbon ambitions in favour of damaging short-term fixes. We