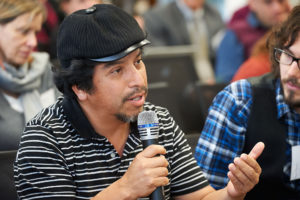 The Santa Rita hydro dam is a violation of the basic rights of native people. This project, supported by the State of Guatemala and the funds granted by the major banks of Switzerland, Germany, Spain, Netherlands and by the World Bank for the general development of the Q’ eqchi communities of the Dolores River, generated the consequences feared from the beginning: death, fear, populations displacement, expulsions and repression of the local communities. In 2009, the Q’ eqchi communities of the Dolores River region were informed about the future construction of a hydro dam in the vicinity. Enforcing their rights, they sent official statements, reports and requests to the Guatemala governmental authorities (Mayor, Governor and other officials) in order to obtain further information in vain, thus going on with rights violation.

The region of the Dolores River extends on the municipality of Cobán, in Alta Verapaz, whose inhabitants are mainly Q’ eqchi people. The communities present the problems affecting the majority of the indigenous population in Guatemala: poverty, malnutrition, lack of healthcare, teaching and stable work. The communities have heard about the construction project of a hydro dam on the Dolores River, Xalaja estate, since 2009. They immediately asked for more information to the local authorities, but no answer ever came. In 2010, the communities decided with the departmental authorities to refuse this construction project. But this agreement was not respected. On the contrary, the State and the company reacted with violence and terror after the death of young David and Ageo, until repression bursts on 14-17th of August 2014.
The news of the construction and the violation of the human rights divided the communities. Acts of persecution, deaths, violence, threats and other forms of social domination in which not only company blue-collar workers and national police officers, but also local owners, took part in brought death and desolation on the region.  The 2014 August repression resulted in terror, forced displacements of populations and a humanitarian crisis in the region. Pregnant women, now considered as criminals, had to imagine survival strategies in order to give birth under more or less decent conditions, since they were denied access to the Cobán hospital unless proving where they came from. 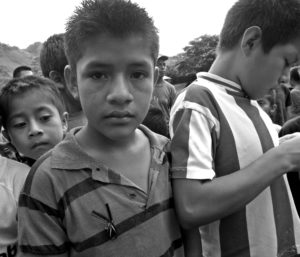 “What should we do for the police to stop tracking us?” said a 70-years old native. “How dare they banish us from our lands that belong to us?” said another. “The communities do not want any hydro dam or development model, because these only brought them fear, pain and tears. They never improved their lives, quite the contrary.” Today, the communities ask the financing agents to stop supporting company owners since they are convinced this money won’t be used in their best interest. On the contrary, it will serve to destroy them. The local representatives are questioning themselves: “Where do the resources used by the dam-partisan community members to buy the weapons used to intimidate dam opponents come from?”
Communities complained through the People’s Council of Tezulutlán to the financing agents such as the World Bank, the FMO and the DEG, and were recently visited by the CAO to who they expressed their incapacity to open dialogue with a company that oppresses them. One of their requests was to meet the President who, as Head of the State, has accountability to provide explanations for the repression he is inflicting to these communities.
As previously stated, the resistance of the communities towards such extractive model of development goes well beyond simple rejection of the model itself: it is first and foremost a matter of dignity. The lands and the territory are the dignity of native-people, and using these without consultation with natives is a violation of their identity.

The People’s Council of Tezulutlán (CPT) is an organization gathering the Mayan people of Q’ eqchi’, Poqomchi and Achi from the departments of Alta Verapaz and Baja Verapaz.
The CPT enjoys a large participation from the Community, since its organisational political development for the defence of the territory is nourished by experiment and contributions of people from various backgrounds. Indigenous and rural social organizations, academicians, Mayan cosmogony and historical communities take part in the process claiming for the recognition and the respect of their lands and their territory, as well as of economic, political and cultural rights essentials to their development.