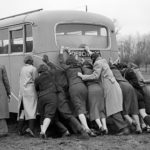 Carbon Market Watch has presented new ideas on how to tackle the sixty percent of EU greenhouse gas emissions covered under the so-called Effort Sharing Decision (ESD). Two new reports published in June look at how successful the legislation, which only entered the implementation phase last year, has been in tackling emissions from sectors such as agriculture, transport and buildings which are not covered by the EU’s carbon market.

The reports find that most Member States will overshoot their individual targets under the Effort Sharing Decision by between 2 and 44 percent even without putting in place any additional measures. Most Member States have therefore not planned any significant additional policies beyond those that already exist. Carbon Market Watch says this shows the current targets (for the year 2020) are too weak and will delay the implementation of essential new policies for another decade.

In addition, the ESD provides flexibility options to make it cheaper to comply with the targets. But the report shows that this weakens the incentive to invest in domestic measures still further. In fact, more than 50% of reduction efforts can be achieved by using emissions offsets generated outside Europe. Until 2020, Member States can use around 750 million offsets to comply with their targets. Furthermore, the main international offsetting schemes have been repeatedly criticised for not representing real emissions cuts, lax sustainability, and even human rights abuses.

Looking ahead to the post-2020 period, Carbon Market Watch says the ESD should be the driving force of climate efforts, by stimulating Europe and its Member States to develop policies that reduce emissions in the buildings, transport and agriculture sectors. The ambition level of the post-2020 targets need to be sufficiently high to fully exploit the potential of cost-effective measures and drive real emission reductions.

Carbon Market Watch also says that loopholes that could potentially undermine the effectiveness of the ESD need to be closed, again to ensure that the legislation drives real emissions cuts. By 2020, a surplus is expected to accumulate in the ESD equal to almost 600 million tons of CO2-eq. In order to avoid future inaction and carbon lock-in, this surplus should not be allowed to dilute future climate action.

This research also warns against offsetting or credit exchange between land use measures and the ESD to ensure that any credits earned from large forest sinks do not result in a reduced effort in sectors such as buildings where major emission reductions are needed.