Executive summary
A new offsetting scheme called the Carbon Offsetting and Reduction Scheme for International Aviation (CORSIA) was established by the International Civil Aviation Organisation (ICAO) in 2016 to compensate for the industry’s emissions growth above 2020 levels. Although this measure will address less than a third of the sectors’ total expected emissions in 2030, to date it is the only international mechanism in place to address the climate impact of international aviation emissions.

With all countries having climate targets under the Paris Agreement and having started to move away from the concept of offsetting, the CORSIA is the only significant carbon offsetting scheme in the post-Kyoto period from 2021 – 2035.

The reliance on purchasing carbon credits from reductions in other sectors poses significant challenges to ensure the integrity of the scheme. Of paramount importance are, inter alia, the accounting rules to avoid double counting of emission reductions towards the Paris Agreement and ICAO’s own targets, and associated transparency requirements for airlines to monitor their emissions, as well as the quality criteria of carbon credits eligible for use under the scheme.

ICAO parties plan to decide on the rules for the CORSIA by June 2018 in order for countries to adopt and implement the rules into their own regulatory processes. The CORSIA as a first step to address aviation emissions will have far reaching implications, not only on the effectiveness of limiting aviation’s climate impact but also on the success of the Paris Agreement; specifically, how aviation’s measure interacts with national climate targets.

Implementation of the CORSIA requires a coordinated effort and approach between ICAO and the United Nations Framework Convention on Climate Change (UNFCCC). Many countries are not part of the ICAO process and have so far not been granted access to important information regarding the detailed rules, which can impact national implementation. Some countries already have climate measures in place to address aviation emissions, such as the EU’s Emissions Trading System (EU ETS) and Canada’s federal carbon pricing backstop. For the EU ETS, the implementation will be challenging because the CORSIA has a less ambitious target. Additionally, the magnitude of its impact on EU climate targets will not be known until the environmental integrity of eligible offsets can be assessed.

Transparency on how the CORSIA rules will be designed as well as opportunities to engage in this process by all affected stakeholders are paramount for the effectiveness of the CORSIA.

While in principle, the ICAO general rules of procedure promote public participation, they have inexplicably not been applied to meetings or the level of transparency of documents relating to aviation’s climate impact including the development of the CORSIA. ICAO Council meetings are held without public observers, documents of meetings of the Committee on Aviation and Environmental Protection (CAEP), in charge of developing the rules of the CORSIA, are locked away from the public domain, and meetings and discussions in technical sub-committees and sub-groups are shielded from public scrutiny through non-disclosure agreements signed by all participants.

However, from the 45 countries that are members or observers of the ICAO Council and CAEP, 13 have signed up to the Aarhus Convention which obliges them to provide access to information, public participation in decision making and access to justice. With the CORSIA receiving growing international attention on its climate impact and consequences on national climate legislation, more and more stakeholders, especially parliamentary institutions but also the general public, have started to demand access to information and engagement opportunities.

Transparency is a fundamental principle of democracy and good governance. With the celebration of its 70th anniversary following the establishment of ICAO in 1947, it is time for ICAO members to revisit the interpretation of
its rules and procedures for public participation and access to documents with the goal to put the ICAO processes on par with similar international processes that can offer a wealth of experience on how to engage the public in environmental decision making.

This policy brief provides background on the new CORSIA scheme and its impact on the Paris Agreement, explain the various ICAO bodies involved in the decision making processes and how transparency is currently handled. It offers considerations and recommendations to improve the ICAO public participation process to ultimately increase the legitimacy and quality of decision making. 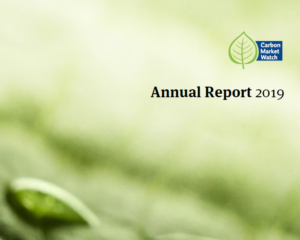