Report: Offsetting in the aviation sector 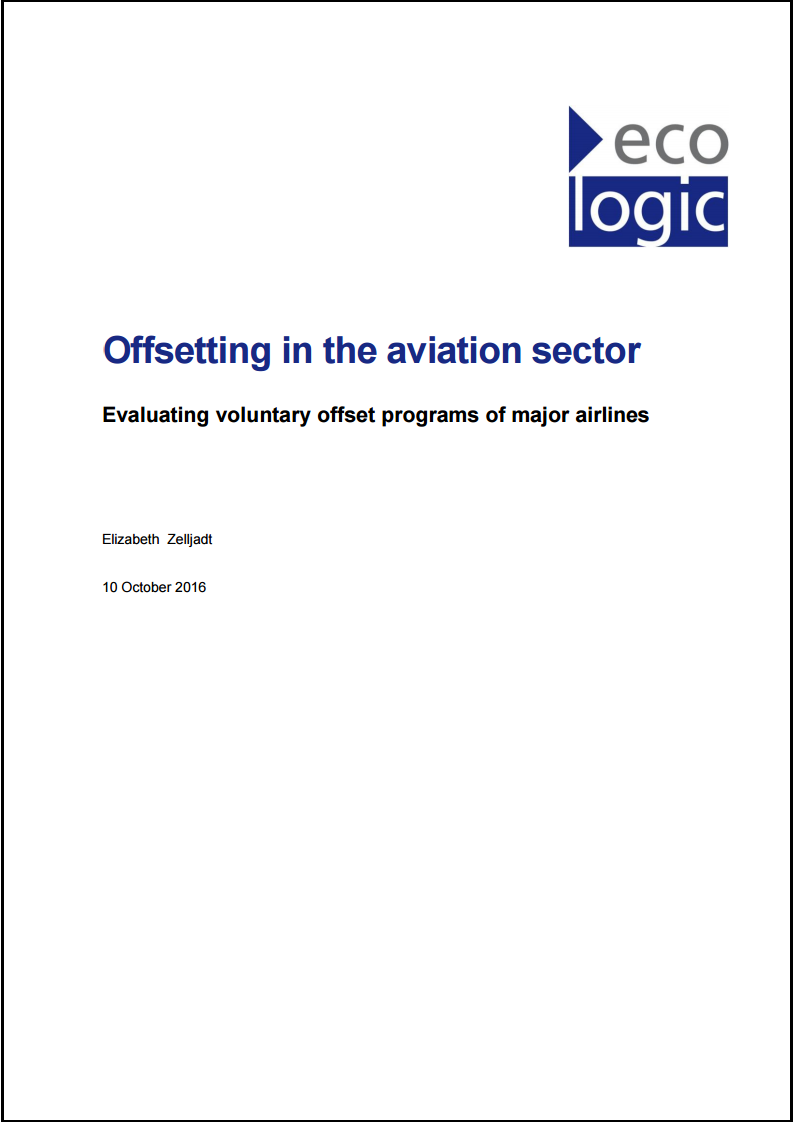 Efforts to address the rapid growth of emissions from air travel have been under discussion for years within the United Nations’ aviation body – the International Civil Aviation Organization (ICAO). In 2013, ICAO agreed on a goal of limiting international aviation’s net emissions growth to 2020 levels (estimated at roughly 700 million tonnes CO2 per year in 20201 ), via a mix of efficiency measures, biofuel use, technology and operational improvements including a CO2 standard, and a global market-based measure (GMBM). In other words, the industry’s growth from 2020 onward should be “neutral” in terms of net CO2 emissions.

Along with airline operational changes and aircraft technology improvements, offsetting is expected to help compensate for the gap between what the other measures are supposed to accomplish and the reality of exponentially growing emissions from the sector. Nevertheless, the idea of offsetting as a measure for achieving reductions has gained support recently, with a June 2016 meeting of the trade association for the world’s airlines (the International Air Transport Association or IATA, representing over 250 airlines or 83% of total air traffic) urging ICAO to adopt a global market-based measure.2 At the 39th ICAO Assembly held in the fall of 2016, ICAO states adopted a resolution establishing the Carbon Offset and Reduction Scheme for International Aviation (CORSIA). The final CORSIA3 was a departure from earlier draft texts, starting with two voluntary phases until 2027. Due to exemptions and the fact that opposed states with rapidly growing aviation hubs decided not to participate, the CORSIA is now expected to cover only around three quarters of emissions above 2020 levels.

Estimates of the volume of CORSIA units needed to offset aviation’s emissions growth vary – one study predicts demand for nearly eight billion tonnes of offsets cumulatively through 2040.4 With such large volumes of emission reductions at stake, ongoing consultations regarding the quality of allowable offsets are critical to ensuring that an offsetting approach for aviation has environmental integrity. Most policy makers have come to a consensus on the meaning of “quality” and “environmental integrity” in terms that such units must be real, permanent, additional, measurable, and only counted once towards a mitigation commitment. Offsets without these qualities would undermine the effectiveness of a market-based measure. Information on existing offset programs used by global air carriers is useful in this regard, as it sheds light on current trends and perceived “best practices” among the industry players who will be buying whatever CORSIA units that ICAOs deems eligible.

To that end, this report investigates the way air carriers currently engage in offsetting (to the extent they do so at all), with a focus on the offset project types, credits, and entities involved. It consolidates evidence of offsetting practices from over 30 air carriers, organized in an order loosely determined by a combination of carrier size/”importance” as measured by annual Scope 1 emissions5 and availability of corporate sustainability or emissions information.