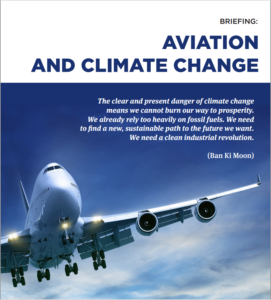 Climate change is happening. Global average temperatures have already increased by 0.8ºC above preindustrial levels. Current trends imply a warming of 2.9-5.2ºC by the end of the century, which, even at the low end of the range, will cause great impacts on the planet and threaten many areas of human life, including health, food security, economic growth, societal change, and drinking water. 2015 is a key year for global efforts to combat climate change and keep warming under 2ºC, the warming limit agreed in the UN Framework Convention on Climate Change negotiations.

Aviation currently accounts for 5% of global warming and is the most carbon intensive and fastest growing transport mode. Its current CO2 emissions are approximately equal to those of Germany, are predicted to grow by up to 270% between 2010 and 2050. This is fundamentally incompatible with a remaining global budget of 1000 gigatonnes of carbon dioxide that can be emitted into the atmosphere . Exceeding this budget would increase the risk of severe, pervasive and in some cases irreversible climate change impacts.

In 1997, The UNFCCC requested ICAO to pursue measures to limit or reduce greenhouse gas emissions, but it wasn’t until 2013 that ICAO, reacting to action by the EU, agreed to begin developing a market-based measure. However the approach remains deeply inadequate, seeking only to limit emissions growth five years out, rather than seeking ways to reduce emissions. Five years into work on a CO2 standard for new aircraft will, on present indications, produce no environmental benefit for a generation.

Aviation emissions must be addressed through rigorous technical and operational measures complemented by market-based mechanisms. The tax-free status of fuel used for international aviation, a relic from the 1940s, is inflating demand for fossil fuel and flies in the face of efforts to decarbonize the global economy. The VAT exemption similarly works at cross purposes ICAO, the UNFCCC, G20 and individual governments all have key and complementary responsibilities. The EU as a whole must lead multilaterally and by addressing European emissions. Some proposals for stronger action by the EU and its Member States are given below.