In many ways, 2021 was a year of pivotal moments that set the stage for CMW’s work to come.

In July, the European Commission announced the Fit for 55 package. The CMW team eagerly awaited the press conference, which started with a two-hour delay because some Commissioners had reservations about the package until the end. But then Commission President Ursula Van der Leyen walked on stage with several other members of her cabinet and pronounced: “Europe is now the very first continent that presents a comprehensive architecture to meet our climate ambitions.” But were these nice words going to be matched with meaningful policymaking action?

Soon afterwards, the details of the package were published and the CMW team went into the frenzy of analysing hundreds of pages of legislative proposals relating to the reform of the EU’s Emissions Trading System (EU ETS) and the new Carbon Border Adjustment Mechanism. We discovered many shortcomings but also opportunities to help accelerate the decarbonisation of industry, aviation and shipping, and were also drawn into commenting on the proposed ETS for road transport and buildings. Fortuitously, this lawmaking buzz coincided with the launch of our LIFE ETX project which, with
ten partners across EU, seeks to make emissions trading work for citizens and the climate.

A strict regime of daily COVID testing made it possible for us to attend COP26 in Glasgow in the autumn. CMW went to influence the negotiations on international carbon markets and to witness the long-awaited agreement on Article 6 that would complete the Paris Agreement rulebook. Amongst several shifts which made the agreement finally possible was the astonishing moment in the first week when Arab countries budged and allowed some human rights into the text of the agreement.

Nevertheless, the civil society demand to include the ‘free, prior and informed consent’ of affected communities to carbon-credit generating projects did not make it into the agreement. Besides other challenges we see in the year following the agreement, it is precisely the rights of indigineous people that are being ignored as “carbon is the new gold” and new golddiggers try to cash in on natural resources without due recompense for those who look after them. Influencing the emerging governance of
carbon markets – be they under the auspices of the UN or ‘voluntary’ ones – will occupy us for the years to come. Luckily, we managed to add a new funder, Quadrature Climate Foundation, to our portfolio in order to expand our work in this domain.

More and more companies have been jumping onto the net-zero bandwagon, one that should really be reserved for carbon accounting between states. The proliferating corporate net-zero and carbon-neutrality claims, including from fossil fuel companies, are often primarily motivated by the desire to appear to be taking the climate seriously while continuing with business as usual. Part of this detrimental trend is a flawed focus on carbon removals which set off our educational and
advocacy efforts for the years to come.

CMW has successfully survived another pandemic year and thrived in the process. We moved from our old school NGO abode, which we had called home for a decade, to smaller but more state-of-the-art premises in a co-working space. In the process, we adopted a leaner but fitter hybrid working system, which combined the advantages of office and teleworking but without the wasted space of empty desks.

In addition to our team of dedicated and talented eco-champions, we also enjoyed the fabulous support of our honorary board members, the members or our association across the world, our project partners and engaged funders. A huge thank you to them all for having contributed to the success of Carbon Market Watch in 2021. Together, we step into the future stronger and readier for the challenges ahead. 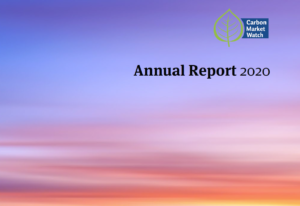 Foreword That 2020 was an exceptional year is to state the obvious, just as terrible human impacts of the Covid-19 pandemic are painfully still continuing