As the global efforts to cut CO2 pollution from ships hit the wall, regions and countries must step up. In Europe, work to bring the sector under the bloc’s carbon market is ongoing, but slowing down. 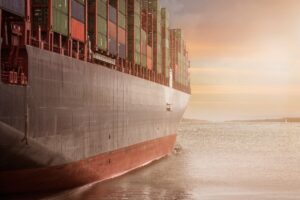 In 2018, the IMO adopted a climate strategy aiming to halve the sector’s emissions by 2050. This month’s decision breaches the initial strategy in three crucial ways: It doesn’t reduce emissions before 2023, will not peak them as soon as possible, and will not set the sector on a pathway consistent with the Paris Climate Agreement goals. The decision will barely make a dent in shipping emissions: under business-as-usual emissions would grow by 15% between now and 2030 – this ‘climate’ policy would shave a measly 1% of that growth.

As the global talks have proven to lead nowhere, the focus must now shift to regional and national regulation. In Europe, as part of the EU Green Deal, the European Commission is expected to propose extending the EU carbon market to cover international shipping in the context of the upcoming review of the scheme.

The European Parliament isn’t waiting for this. In September, lawmakers agreed that an ongoing reform of EU rules on the monitoring of shipping emissions (MRV) should be used to bring the sector under the EU carbon market from 2022. They also proposed a binding target to force shipping companies to reduce the carbon intensity of their transport by at least 40% by 2030 compared to the 2018-2019 baseline and to establish an “Ocean Fund”.

The Ocean Fund would recycle half of the revenues from the EU carbon market generated by the shipping sector into supporting decarbonization actions and innovation in the sector itself and the protection of marine environments. This could mobilize between 1.5 and 2.5 billion euros annually for climate action in this sector.

The Parliament agreement is a great starting position for bringing the shipping sector into the EU carbon market. It would price carbon pollution from shipping and reinvest the revenues to support further climate action in the sector to drive innovation and help create sustainable jobs. A binding 2030 emissions reductions target also pushes for short-term climate action, something that the IMO has turned its back on.

Unfortunately, the German presidency of the Council has been reticent in moving forward with the next phase of political negotiations (the so-called ‘trilogues’). Only this week news emerged that they are punting it to the future, and absolving themselves from the responsibility of tackling shipping emissions as soon as possible.

International shipping is responsible for 3% of global CO2 pollution. Letting it off the hook for another 10 years – the crucial years to avert the worst impacts of the climate crisis – is out of the question.

Sailing towards a global carbon price in the maritime industry?