Home » News & Press » Why we need a pollution price for shipping

Why we need a pollution price for shipping

Earlier this month, the 173 member countries of the UN’s International Maritime Organisation (IMO) agreed to cut emissions from ships by 50% below 2008 levels by 2050 and pursue efforts to phasing them out completely. An effective carbon price, combined with short-term operational and technical measures, will help unlock the huge potential for pollution-free shipping. 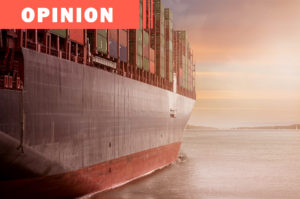 A coalition of high-ambition nations, including low-lying island states and the European Union,  had pushed for deeper cuts, with Marshall Islands calling for full decarbonisation of the sector by 2050.

While keeping global warming below 1.5C would require full decarbonisation of the shipping sector between 2030 and 2050, the initial strategy will at least set in motion the transition to carbon-free shipping. However, its effectiveness will ultimately be determined by how fast the industry adopts measures to reach the goal and to go beyond that.

Shipping is responsible for over 2% of global emissions (equivalent to the emissions of approximately 250 coal-fired power plants) and its share could rise to as much as one-fifth by 2050 unless action is taken. The IMO will discuss the measures to help achieve the now set goal later this year.

The Organisation for Economic Cooperation and Development (OECD) has estimated that the shipping industry could almost fully decarbonise by 2035, using existing technologies.

An effective carbon price would provide an additional incentive to employ renewable fuels and to implement operational and technological changes to reduce emissions. As pointed out by the OECD, a pollution price would allow for incorporating the costs of shipping’s emissions into shipowners’ decision-making, helping to make the polluter pay for the damage the pollution causes on the society and incentivizing cleaner shipping. It will also allow investors to integrate climate risks into their lending decisions.

Carbon pricing can moreover generate billions in revenues that can be used for example to compensate least developed countries or support the production of renewable marine fuel, particularly in developing countries that have the greatest potential to be future suppliers.

The industry has taken the first step towards decarbonisation, but there is no time to sit back and relax. It must now commit to rapidly implementing near-term measures, as well as carbon pricing in the medium-term, to stay on track with the Paris climate goal to limit global warming to 1.5 degrees Celsius.