The European Parliament’s negotiator on aviation emissions has proposed to bring international flights back under the EU’s carbon market if the global aviation deal to tackle emissions is deemed insufficient.  Ambition in the sector remains low, but the draft report calls for higher auctioning shares, a timely review comparing EU and international aviation policy, and maintaining climate ambition. This signals that Europe will not let a weak international measure undermine its domestic policy. 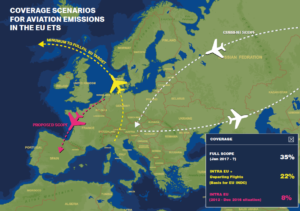 In February, the European Commission proposed to continue to exempt international flights from the EU’s Emissions Trading System (EU ETS) following the adoption of a global offsetting measure by the UN aviation body.

The scheme – known as CORSIA – falls short of achieving its target goal of carbon neutral growth in 2020. The European Parliament and the EU Member States are currently forming their positions on the draft law which must be adopted by the end of March 2018.

Last week, the British MEP Julie Girling (European Conservatives and Reformists) who leads the talks on the file at the Parliament published her proposal on how to treat the aviation sector under the EU ETS.

The 2030 EU climate targets were calculated assuming all flights both within and leaving from Europe were included in Europe’s carbon market. Girling’s report revives that option to maintain EU ambition from 2021, but her proposal limits coverage to flights within Europe until 2020. This raises the question of where pre-2020 ambition in the sector will come from. Her proposal remains highly favorable for the aviation industry and will not inhibit the rapid growth of the sector.

Girling wants to increase the share of pollution permits that the airlines have to buy from 15% to 50%, earmarking the generated revenues for climate finance. This is a step in the right direction, but for a sector paying almost nothing for what will become a $700 billion climate impact in 2035, all allowances for the sector should be auctioned to implement the polluter-pays principle.

She rightly acknowledges that the global aviation deal adopted last year is incomplete and should not automatically replace the EU ETS in 2020 – as many in the industry would like to see happen. Instead, she wants the Commission to carefully review the offsetting scheme in January 2019 against criteria looking at the measure’s environmental effectiveness. In case the review concludes that the mechanism is ‘insufficient to achieve the Union’s climate objectives’, international flights should come back under the EU ETS from 1 January 2021.

In order to protect Europe’s climate targets in 2030, Carbon Market Watch recommends that the EU ETS covers international flights in 2021.

What’s next for the aviation sector?