EU at risk of climate action standstill in the coming years

Analysis by the European Environment Agency (EEA) finds that last year, the EU reduced its domestic greenhouse gas emissions by 23% compared to 1990 levels. No extra efforts are needed from now up to 2020 for the EU to meet its climate target of 20% emission reductions. Carbon Market Watch calls on the EU to increase its 2020 climate target to avoid that climate actions in the EU come to a halt. A higher 2020 target will also ensure that surplus credits generated until 2020 cannot be used to offset emissions in the 2030 climate framework.

It is no secret that the surplus of emission allowances in the EU’s Emissions Trading System (EU ETS) has accumulated to represent 2,100 million tonnes (Mton) of CO2-eq. For the first time, the EEA has now also analyzed the surplus of allowances in the Effort Sharing Decision, governing the non-ETS sectors such as transport, agriculture, housing and waste. The Effort Sharing Decision (ESD) sets out national climate targets annually in the period 2013-2020.

The 1.5 billion tonnes of hot air in the ESD

By 2014, the oversupply of allowances in the ESD had accumulated to represent 477 Mton CO2-eq. This surplus is expected to grow further to equal about 1,500-1,700 Mton CO2-eq by 2020. Any use of international offsets by countries will increase this surplus even further. The result is that the ESD target will be overachieved by more than 50%, so that by 2020 emissions are reduced by at least 15%, rather than the required 10%, compared to 2005 levels.

While this result seems like good news at first sight, a closer inspection at the reasons show that the over-achievement is mainly caused by weak targets. Projections by Member States show that only around 100 Mton CO2-eq of additional emission reductions are expected to take place in the non-ETS sectors between 2013 and 2020. Most of these emission reductions take place in the building sector, while the emissions in the agriculture sector will see a slight increase. That means that only about 100 Mton CO2-eq of the ESD surplus by 2020 is due to the adoption of additional mitigation measures. A large majority of the surplus by 2020 can hence be attributed to insufficient targets.

Four countries on track to miss their climate targets

Although at the EU level, the ESD emissions will remain below the ESD targets in every year between 2013 and 2020, the situation is different at the country level. The emissions in four countries, Austria, Belgium, Ireland and Luxembourg, could exceed ESD targets for one or more years of the 2013-2020 period. Their options are either enhancing their national efforts to bring their domestic emissions below ESD target levels and/or using flexibility provisions provided under the ESD. Carbon Market Watch will keep a close eye on the ESD implementation to ensure that countries focus on domestic abatement to meet their targets rather than buying international offsets with low quality standards.

The EEA’s report also points out that the emission reductions needed between 2030 and 2050 will have to be three times steeper than the necessary reductions between now and 2030. The below figure shows that the EU’s 2030 climate target is not in line with EU’s 2050 objective of reducing emissions by 80-95%. The EU’s 2030 climate target of 40% reductions will require significantly more efforts after 2030 than before, possibly delaying necessary measures for another decade. “Long-term action should not be delayed but is required now” writes the EEA, since the effects of policies to transform the EU’s energy system take time to materialize. 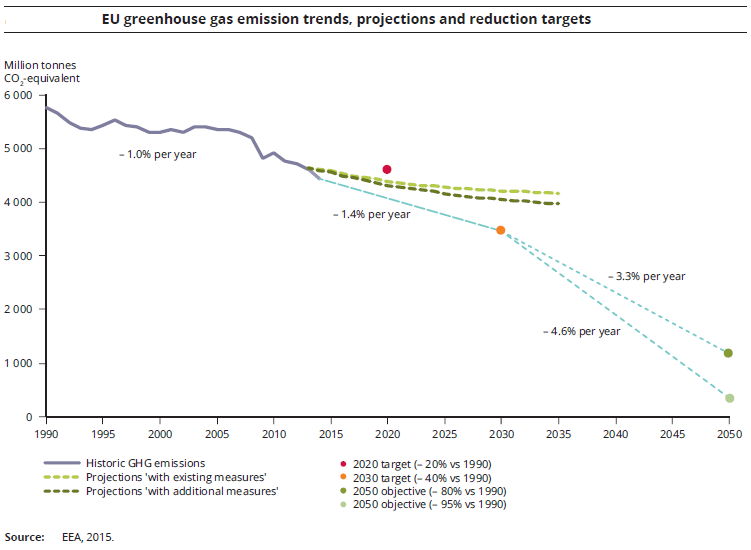 How to make EU’s climate policies fit for purpose again

With limited emission reductions expected from now until 2020 compared to the first half of the decade and the need for an ever increasing amount of mitigation from countries, is there hope of achieving our long-term climate goals? According to the report, financially viable solutions remain. The EEA therefore urges Member States to look beyond the short-term costs of policy measures and also consider future cost reductions that measures with long-term mitigation potential can bring about.

In line with these findings by the EEA, Carbon Market Watch calls on the EU to step up its ambition and set a higher 2020 and 2030 climate target.  The higher ambition level can be implemented through the legislative proposal on the EU ETS and the upcoming legislation on the post-2020 ESD. See below our recommendations on how to make these tools fit to reach our 2030 goals and beyond.