NEWS: Update from Bonn: What’s in store for market mechanisms? 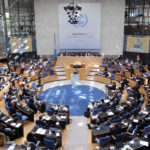 With another round of UN climate talks underway in Bonn, uncertainty remains over the role that carbon markets will play in the Paris Protocol and accompanying decisions.

A key challenge for the latest UNFCCC negotiations in Bonn has been to consolidate options in the 86-page Geneva negotiating text. At the beginning of week one, Parties made some progress to this end, but in Monday’s [8 June] ADP stock take, Parties called for a step change so that actual negotiations could begin.

While Bonn has so far kept all Parties’ options in the text, once negotiations begin in earnest, there is the risk that important ideas may be lost or traded away by Parties in the three remaining sessions this year, so that other national priorities are kept in.

Carbon markets currently feature in a number of places in the negotiations.

In the ADP, carbon markets currently feature strongly in the mitigation section and also, encouragingly, in the section looking at means to raise climate finance, by expanding on the precedent of the levy on the CDM providing finance into the Adaptation Fund. Key principles are present in the text, including safeguarding environmental integrity through avoiding double counting, setting credible baselines and ensuring comprehensive monitoring of credits. We shall be working to ensure that these key principles remain in the text.

The Framework for Various Approaches, aims to reach agreement on establishing a international common quality framework over the proliferation of carbon markets around the world. Bonn allowed an exchange of Parties’ views at the level of principles. However, the draft decision proved very contentious even though it was almost completely free of substance. Some Parties called for the agenda item to be concluded as Parties were too far apart to agree anything under the existing mandate. Cognizant of the fluidity of the ADP text going forward, market enthusiasts were fearful that Paris might not create a new, clearer mandate to discuss these issues.

As well as the negotiations around carbon markets in the new Protocol, the future of the CDM (if any) will be one area of discussion and how it should be reformed for the post 2020 period. The experience of the CDM to date offers a wealth of learning – both positive and negative – that should be used to inform discussions on its own reform and in negotiations for any new market base mechanisms. One important reform to the CDM will be establishment of a grievance mechanism, which would allow impacted stakeholders, or their representatives, to raise concerns about any CDM project and require the CDM EB to take appropriate action.

There are a number of possible futures for carbon markets, but ones with international transparency, aided through common accounting and rules will be preferable to a stitch up of bilateral agreements with no oversight. The UNFCCC talks will continue in August.