Forestry/Land-use projects in the CDM 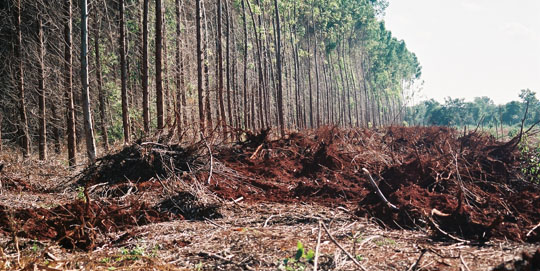 The CDM currently allows afforestation and reforestation (A/R) activities. These describe the direct conversion of non-forested land to forested land through planting, seeding or human-induced promotion of natural seed sources.  ‘Reforestation’ and ‘afforestation’ principally describe the same activity, the main difference between these terms being the length of time the land was non-forested before the re-planting activity began. During the Kyoto Protocol’s first commitment period (2008-2012), CDM activities are limited to afforestation/reforestation of land that did not contain any forest on 31 December 1989.  Such projects receive carbon credits because biological sequestration absorbs CO2 through the growth of vegetation and the continued storage in plant tissues and soils. As of April 2012, less than 40 projects have been registered and only one project has received credits.

Take Action Now!
A call for public input on the draft manual of “Afforestation and Reforestation Projects under the Clean Development Mechanism” is now open. Have your say!

‘Tree projects’ have a natural appeal because they conjure up images of pristine and healthy ecosystems. The reality of forest carbon sequestration projects is far more complicated. The amount of carbon sequestered by forests depends upon many factors including tree age, growth rate, local climate and soil quality. Calculating the amount of CO2 taken up or stored in a forest is therefore difficult and complex. This is one of the reasons so few projects have been implemented.

The definition of ‘forest’ according to the UNFCCC allows CDM projects to reforest with non-native monoculture tree plantations, such as eucalyptus. This ignores and fails to create the value of natural forest ecosystems, such as habitat for biodiversity. The definition of ‘forest’ under the UNFCCC allows tree plantations to be continually harvested under the guise of being “temporarily unstocked”. This encourages short cycle rotations.

Many CDM forestry projects are eucalyptus tree plantations that receive carbon credits from re-planting the eucalyptus tree harvest. Eucalyptus trees are only native to Australia and if planted in other countries such as India, can have severe negative impacts, such as enormous water consumption.

Leakage is the shift of emissions to a different location because of a project activity. This is of particular concern in forestry projects. For example, the reforestation of pastureland may drive local farmers to clear forests elsewhere for new pastures. Some leakage cannot be addressed. Leakage must be accounted for and subtracted if project calculations are to be credible and accurate. Yet accounting accurately for leakage is in many cases not possible.

Forestry projects are problematic because of the risk of reversal of CO2 storage, for example in case of fire or logging. This is why under the CDM, forestry projects receive offsets that are only valid for a certain period:

Because of permanence issues such credits are not accepted in the EU-ETS.

Forestry and project types that use large amounts of land can be problematic because they can raise land tenure issues and lead to in some cases violent conflicts over land use and ownership.

It has been suggested that ‘forests in exhaustion’ (depleted forests) should be included as afforestation and reforestation CDM project activities. CDM Watch strongly opposes the inclusion of this project type because it is likely to provide subsidies to industrial tree plantations in circumstances that encourage bad management practices and the establishment of plantations in inappropriate locations. Such subsidies would insulate the wood growing and processing industries from commercial pressures to improve their efficiency, reduce wastage, increase recycling and select more suitable sites for plantation establishment. The ‘forests in exhaustion’ proposal also risks undermining the REDD+ mechanism by incentivising the establishment of plantations under the CDM rather than the restoration of natural forest ecosystems under REDD+.

Ecosystems Climate Alliance and CDM Watch response to call for submissions on the inclusion of reforestation of lands with forest in exhaustion as afforestation and reforestation CDM project activities. (pdf-file, March 28, 2011)