Report: The Role of International Offsets in the Fuel Quality Directive 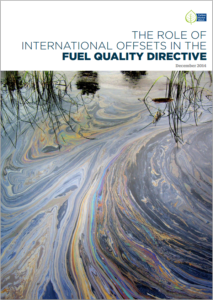 The revised Fuel Quality Directive (FQD) has the objective of reducing the greenhouse gas intensity of transport fuels by 6% by 2020, compared to 2010. Recently a revised proposal for a Council Decision to implement the FQD was adopted by the Council and the European Parliament.

Fuel suppliers can meet the 6% target through various options such as blending biofuels, supplying electricity, hydrogen or other low carbon fuel. An additional option that has now been proposed in the FQD’s implementing measure is to reduce emissions through savings from emissions occurring prior to the raw material entering a refinery or a processing plant where the fuel was produced, so called Upstream Emissions Reductions (UERs). Depending on the use of first-generation biofuels, these UERs could provide 15% to 50% of the overall 6% target. The overall effectiveness of the FQD’s decarbonisation objective is therefore very dependent on the way in which UERs lead to real and additional emission reductions.

Various offsetting schemes could be used in order to implement, calculate and verify these upstream emission reductions. These offsetting programmes can generate offset credits from projects that reduce emissions in the fuel’s lifecycle. Existing offsetting programmes that could be eligible for supplying UERs include: the Clean Development Mechanism (CDM), Joint Implementation (JI) and the Alberta Offset System, a compliance mechanism for entities regulated under the Alberta’s mandatory GHG emission intensity-based regulatory system.

Without further guidance by the European Commission, or restrictions by Member States, there is a substantial risk of double counted and non-additional offset credits being used for compliance with the FQD target, seriously undermining the FQD’s effectiveness in reducing the carbon footprint of transport fuels. Double counting can occur because:

Safeguards to ensure that credited projects would not have been expected to happen in a business as usual scenario are also lacking. Without additional safeguards, the Fuel Quality Directive could see offsets from tar sand operations being used both under Alberta’s compliance system as well as under the FQD. The projects that could be (or already have been) registered under Alberta’s offset system include the capture of carbon from tar sand operations for Enhanced Oil Recovery and the construction of road sections connecting the Shell tar sand mining activities to the highway and harbor.

The FQD implementing measure does not specify which offsetting programmes qualify as upstream emission reductions, the only restriction is that the project should have started after 1 January 2011. The Commission has been asked to provide non-binding guidance as regards to savings claimed from the UERs, but it will be up to the Member States to ensure in their national legislation that only additional projects that lead to real savings qualify for compliance with the FQD.

This significantly reduces the risks of double counting savings both under a third country’s compliance system and the FQD, as well as double counting between EU Member States. It also ensures consistency with the existing EU restrictions on international offsets, since credits from new projects registered after 2012 can only be used by companies under the EU ETS if the projects are located in Least Developed Countries. The same restrictions should apply to oil companies covered by the Fuel Quality Directive.

The restriction to CDM projects in LDCs would also reduce the administrative burden of the European Commission and Member States, ensuring compliance with the FQD with little extra efforts. The CDM already fully prescribes the measurement, reporting and verification requirements to register emission savings and the eligible approved CDM methodologies are limited to venting or flaring projects. The existing EU-centralized registry could furthermore be used for the FQD as well. The only additional check that is required is ensuring that offsets redeemed for compliance with the EU ETS are not at the same time also used for FQD compliance.

The Commission has commissioned and recently released a study[1] which outlines four detailed approaches to upstream emission reduction crediting. Our proposal is consistent with the first option of the study (the ETS-CDM option) which has the potential to deliver even more than the emission reductions required to meet the full 6% GHG intensity reduction target. We urge the Commission to propose limiting the UERs to CDM projects in Least Developed Countries in order to ensure the highest level of environmental integrity and reduce administrative burden for national authorities.

[1] ICCT (2014), The reduction of upstream greenhouse gas emissions from flaring and venting