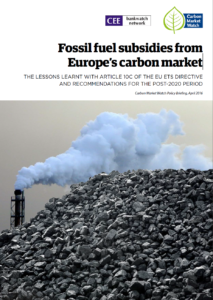 Under the EU Emissions Trading System (EU ETS) the power sector no longer receives allowances for free but is required to purchase them from auctioning. An exception is made through the so called Article 10c of the EU ETS Directive. This provision allows lower-income Member States from Central and Eastern Europe to give allowances for free to electricity installations under the condition that they invest at least the equivalent monetary value of the free allowances in the modernisation and diversification of their energy systems.

The European Commission has already approved in total close to 680 million allowances for the period 2013 to 2019, representing a value of about €12 billion to be invested in modernizing energy systems. Independent analysis of planned investments reveals that Article 10c is used to support electricity production largely through subsidising coal power, including investments in the second largest fossil-fuel power station in the world (Belchatow lignite-fired power station in Poland).1 Rather than diversifying energy sources, three of the biggest beneficiary countries – Poland, Czech Republic and Romania – who account for 85% of the free allowances to be handed out, will essentially use the accompanying investments to modernise fossil fuel capacity, invest in new fossil fuel energy production, such as hard coal and lignite, or increase future coal consumption.

The ongoing legislative process to revise the EU ETS rules for the post-2020 period provides an important opportunity to ensure that Article 10c moves away from subsidizing coal to becoming a tool to diversify the energy mix, reduce energy poverty, and lower the import dependency of the beneficiary countries. Such investments will help decarbonise the economy, while maintaining the potential to create more jobs in the construction sector and lead to significant health benefits.