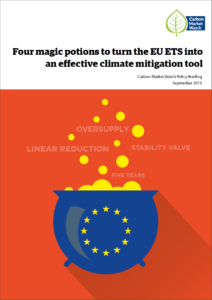 In July 2015, the European Commission presented a legislative proposal to revise the EU’s Emissions Trading System (ETS) in order to implement the EU’s 2030 target of at least 40% domestic emission reductions. Although the proposal suggests a few improvements, it fails to introduce much needed provisions that improve the mitigation potential of the EU ETS.

It is now up to Members of the European Parliament and the EU Member States to turn the EU ETS into an effective climate mitigation tool as part of the negotiations on the ETS revision proposal.

The following suggestions can help make the EU ETS fit for purpose again:

The EU’s inadequate climate target has resulted in a large oversupply of pollution permits, which is more than twice the amount that companies need to keep emitting business-as-usual, and a carbon price that is too low to promote climate action. To avoid the large surplus of pollution permits to dilute the necessary efforts in the 2030 package, the Market Stability Reserve needs to be emptied in 2020 to remove at least two billion surplus pollution permits.

By agreeing on “at least” 40% GHG emission reductions for the year 2030, EU leaders decided to keep the door open to a higher 2030 climate target. This provision now needs to be operationalized by adjusting the reduction trajectory and increasing the so called linear reduction factor to at least 2.6%. This is necessary to reap the benefits of early action to reach the 2050 decarbonisation objective cost-effectively and avoid delaying efforts until after 2030.

Shrinking tonic:  Limit the surplus in the reserve to account for technological progress

The rapid decline in costs has resulted in a faster uptake of renewables than expected, which meant that the EU ETS targets have been outpaced by actual emission reductions. However, there is currently no mechanism to bring the EU ETS in line with technological progress. To adjust the EU ETS functioning as new and cheaper low-carbon technologies become available, an upper limit on the number of emissions allowances that the Market Stability Reserve (MSR) can hold, combined with an automatic removal of allowances when the ceiling is reached, should be introduced.

The proposed length of the ETS trading period means that the EU’s ambition level is carved in stone until 2030, locking down ambition for the next fifteen years. The adoption of 5-year trading periods would instead make the EU ETS more responsive to market developments, such as technological and economic changes. It would also allow the EU to be in synch with a likely 5 year cycle in the UN Paris climate agreement.