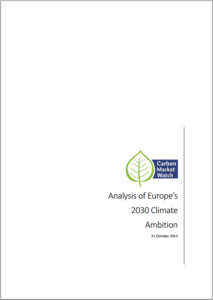 During the night of 23 October 2014, EU leaders brokered a deal on the 2030 climate and energy headline targets. EU’s Heads of States settled on an EU-binding renewable energy target of at least 27%, an indicative energy efficiency target of at least 27% and an at least 40% binding domestic greenhouse gas reduction target by 2030.

This deal setting out Europe’s future climate ambition has to be seen in the wider political context of the international climate negotiations that are expected to deliver a global climate deal at the climate summit in Paris next year. The EU is one of the first in announcing its pledge for the future climate treaty, providing momentum for the rest of the world to follow suit. However, the EU’s climate target fails to be in line with the EU’s fair contribution to tackling climate change which would entail around 55% domestic emission cuts. This lack of ambition is largely caused by the current difficult political and economic climate landscape: The economic crisis has reduced the political willingness to adopt policies that are either seen as expensive or have a potential impact on industry’s competitiveness. Euroscepticism, on the other hand, has put a strain on the regulatory powers of the EU, favoring an (over)reliance on markets instead.

Although the 2030 climate and energy package is centered around the greenhouse gas reduction target with little support from the renewable energy and energy efficiency pillars, a positive decision was to keep the option open of increasing the 2030 climate target at a later stage. But this outcome which required all 28 Member States to agree came at a price: Concessions were made to some countries in the form of energy subsidies and new flexibility instruments. Poland was the most vocal country threatening to use its veto to block the deal in case it was not sufficiently compensated financially. Poland succeeded in ensuring that its coal-dominated energy sector will remain shielded from the carbon price also in the future. Poland also ensured access to new subsidies by establishing a modernization fund that could potentially be used to extend the lifespan of its existing coal power plants. At the same, more wealthy countries with relatively high national reduction targets demanded new flexibility instruments to make sure they would not be faced with high costs. A new flexibility option was borne that allows these countries to buy allowances from the oversupplied carbon market in order to offset emissions in the transport, building and agriculture sectors.