Relying on carbon offsets to meet climate targets is risky and unsustainable. Carbon credits can have low environmental integrity, and they will become increasingly difficult to source as countries need to “keep” their reductions to meet domestic targets. 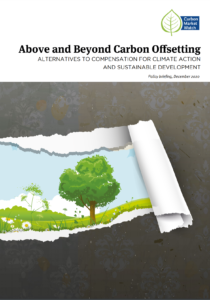 When companies purchase a carbon credit generated in a country that also has a climate target, this does not always deliver an additional reduction. For example, as the voluntary market reductions enable it to meet its target, the host country might decide to not adopt a planned policy. The voluntary support will have replaced public policies, rather than supported extra reductions.

Under such a scenario, there is little difference between a non-additional credit under the Kyoto Protocol and a non-adjusted credit under the Paris Agreement. As a precautionary measure, all carbon offsets sold through the voluntary market should be subject to corresponding adjustments.

Alternatively, credits could be used to measure the financial contribution provided by a company to a country. The company’s emissions would not be “compensated”. This would make companies’ claims more accurate, recognizing that the achieved emission reductions could actually be displacing host country action, and could, inter alia, be non-permanent. Beyond a change in rhetoric, this would protect consumers from false advertising which misleads them into believing that certain products and
services have no impact on the climate.

“Practice-based credits” could also constitute an alternative for companies to finance climate action. Instead of paying for results which can sometimes be non-permanent, overestimated, or simply displacing other actions, companies would pay for practices.

This is particularly suited for activities where the achieved results are likely to be non-permanent, e.g.in the land-use sector, as it would make clear that benefits can only be guaranteed as long as practices are sustained.

Finally, an important benefit of a contribution claim or a practice-based credit is that it will ensure that countries can benefit from all the reductions taking place on their territory. If the cheapest and easiest reductions are sold out of the Global South countries, it may become more difficult for these countries to meet their own objectives.