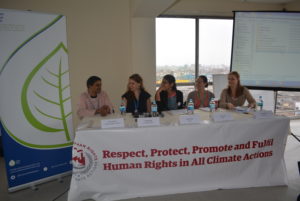 With a number of Clean Development Projects (CDM) in the forefront of climate discussions for failing to deliver clean and sustainable development to poor countries, representatives of civil society gathered to discuss the many implications of coal power projects. The event named ‘The Sasan Coal Power CDM Project Lessons Learnt for Climate Finance’ was held in the People’s summit in Peru to illustrate the repercussions of dirty energy and what happens in the absence of social safeguard systems and disregard for sustainable development benefits within the CDM projects.

The debate, opened by Payal Prekh, laid out how coal power projects do not only disregard development but are strongly linked to violations of human rights. The speakers presented upsetting aftermath of coal power projects – in India and Colombia – and the struggles of the affected communities, only to accentuate the critical need for CDM to shape up and deliver what was set out to do. Soumya Dutta, an activist in India fighting coal power projects and a member of Beyond Copenhagen Collective, depicted how the Sasan coal power project violated contractual obligations to contribute to community and instead affected the most vulnerable in the region by forcing them to leave their homes. Similarly, Susanne Breuer from Misereor raised the case of the coal power mining in Colombia, where coercive displacement and killings took place to make way for coal mining. Cases like this, as Alyssa Johl from CIEL pointed out, only underline the fundamental need for a profound safeguard system within the CDM, which has been in a much too slow process to advance. Juliane Voigt from Carbon Market Watch took this opportunity to announce the launch of CDM Benefit Tracker, an online tool which shows discrepancies between sustainable development objectives of CDM projects and actual eye witnessed local realities.

Reflection Note on the necessity for stakeholder consultations, avenues for redress, and environmental and social safeguards under Article 6 of the Paris Agreement

Green finance must be people-friendly

Letter to EU Commissioners on human rights and climate finance

The road ahead for UN carbon markets