Home » Events » COP21 SIDE EVENT: What are NAMAs and how is civil society engagement important for their success – 12/9

COP21 SIDE EVENT: What are NAMAs and how is civil society engagement important for their success – 12/9 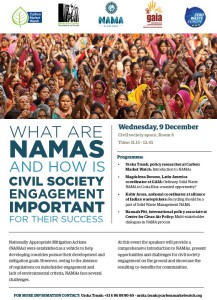 Nationally Appropriate Mitigation Actions (NAMAs) were established as a vehicle to help developing countries pursue their development and mitigation goals. However, owing to the absence of regulations on stakeholder engagement and lack of environmental criteria, NAMAs face several challenges. The need for an event on NAMAs that coincided with COP21 was supported by the fact that NAMAs are often considered the ‘new kid on the block’ and are not widely understood. The event offered a range of speakers to both introduce the wider implications of NAMAs and to expand on the implications of specific projects. As the event moderator, Pierre-Jean Brasier from Nature Code, opened the event by stating the relevance of a NAMAs event as the development of climate financing and climate actions expands beyond traditional approaches. Furthermore, Pierre-Jean highlighted the fundamental role civil society can and must play in NAMAs, particularly in scrutinising their implementation.