Will the dirty banks ever stop financing fossil fuels?

While major banks are making grand climate pledges, investments in fossil fuels continue to increase. Internal carbon prices coupled with the end of fossil fuel subsidies have the potential to direct investments into a clean transition to a climate-safe future.

Over the last few years, as countries globally are slowly moving decarbonisation targets in the direction of what the Paris Agreement requires, private financial institutions are claiming to have begun to follow suit. Many major banks, such as Morgan Stanley, JPMorgan, HSBC and Barclays, have now outlined net-zero pledges. 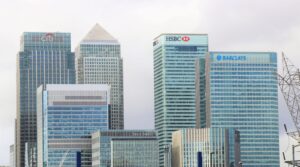 As banks produce few direct carbon emissions themselves (in policy jargon their “scope 1 and 2” emissions), it is their ‘financed emissions’, those associated with lending and investing activities, that must be lowered to reach these targets. Banks play a crucial role in the continued exploration for, and extraction of, fossil fuels and their overall investment continues to grow. Since the Paris Agreement, fossil fuel lending has increased every year and at the current rate, will surpass $1trn by 2030 [1].

Below we highlight why it will require a collaborative effort by governments and banks to adopt a strict policy against all fossil fuel financing, for climate targets to be reached.

For many years, one of the major reasons for banks not lending green boiled down to profitability over perceived risk. The high upfront cost of renewables, as opposed to artificially low-cost fossil fuel projects, combined with a slow payback time, meant banks would rather refrain from crediting low carbon investments. Additionally, low levels of public support in their first years after inception hindered investment further [2]. Fortunately, as the price of renewables has fallen considerably, in part thanks to government programmes promoting their market development, in the last few years, this is changing. 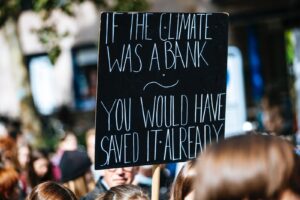 Fossil fuel funding is increasingly becoming an issue the public is aware of. There are currently large numbers of people taking to the streets to make potential customers and employees aware certain banks are financing climate change [3].

Growing public pressure could quicken the time it takes to hit peak fossil banking. But the climate requires more than a plateauing, or a slow decline, in fossil fuel financing.

To drive mass, low-carbon investments by banks and to disincentivise investment in fossil fuels, it is crucial that highly polluting activities become less profitable. This must start with reducing the $400bn/year of government subsidies for the consumption of fossil fuels currently distributed globally. The removal of subsidies would stop fossil fuels from being artificially profitable for banks to invest in.

At a recent House of Representatives conference, climate activist Greta Thunberg called fossil fuel subsidies a “disgrace”, stating that “we have to end fossil fuels now”. If governments around the globe are to listen, this is exactly the pressure needed to spur change. Once economic superpowers such as the USA commit to phase-outs, others are more likely to follow.

A complementary solution lies with deploying a suitable carbon price. The introduction of a carbon price in tandem with the removal of subsidies would contribute to ensuring that the negative externalities associated with financing fossil fuels are accounted for.

A mandatory carbon price on all financial institutions at the governmental level, starting with the heaviest polluting industries (coal) followed by the gradual phasing in of oil and gas industries, has the potential to shift investment from high carbon to clean solutions. A monetary value-added on greenhouse gas emissions resulting from activities which the bank has invested in would mean investing in fossil fuels is less profitable. A gradual phase-in approach would give banks time to prepare and adapt to the changes. These measures were also recommended by the Taskforce on Climate-related Financial Disclosures, a financial stability board established to develop more effective climate-related decisions, to put pressure on financial institutions to divest from fossil fuels.

Some have already started ‘going green’

There are examples of banks taking steps towards sustainability on their own accord. Garanti Bank in Turkey has been adopting green measures for a number of years, such as establishing a carbon price on electricity generation projects in 2018 and placing the environmental and social costs of carbon intensive projects level with the financial cost.

Despite implementing these measures, Garanti Bank remains one of the most valuable banks in Turkey, showing there is an opportunity for banking in a more sustainable way.  A recent report by the IEA and Imperial College London concurs, concluding that investments in renewables have had a 367% greater return than fossil fuels since 2010.

Examples such as these are promising. However, as long as fossil fuels remain a lucrative industry for banks, lobbyists within the industry will persuade the dirty funding to continue – especially without sufficient pressure coming from the outside, e.g. from the public and/or the inside e.g. policymakers. Once a scenario exists where more profits are lost (because external societal costs have been fully reflected in the cost of fossil fuels) than profits made from the investments, financing will fall.

Therefore, a strong carbon price deployed in tandem with the phase-out of government subsidies would go a long way in making fossil fuels unprofitable to all financial institutions.

Same standards for all to ensure emission reductions

The last few years have seen some significant progress in phasing out financing for coal power plants, however, any gains in coal have been far outstripped by gains in financing for oil and natural gas [5].

Furthermore, it is obviously not enough if only some banks choose not to finance fossil fuels. For example, ‘2 degrees investing initiatives’ study found that when the holdings of coal power plants by Swiss financial institutions fell by 15-20% in the period 2017-2020, the coal firms held in the portfolios in 2017 actually increased their coal power capacity by almost 50% relative to 2017.

Therefore, if fossil fuel financing is to stop and not just plateau or be transferred to other sources, policy must be consistent across the entire industry. The adoption of the same standards for all would ensure progress made by those reducing their ‘dirty’ financing the most, won’t be lost to others looking for a quick buck.

We need both subsidies cut and mandatory carbon prices

We need a rapid and sustained drop in emissions on a 1.5°C congruent path. To achieve this, banks are going to have to step up their game and do far more than they have thus far shown themselves willing to do.

Decarbonisation should not be seen as a hindrance but as an opportunity. For banks, this means that those who continue financing fossil fuels may end up stuck with stranded assets and will therefore likely become laggards in the race to climate neutrality. Those investing in the clean transition of our societies will be at the forefront of joint efforts to ensure a prosperous and safe future for all.

For those still unwilling to end their support of fossil fuels regardless of profitability figures favouring renewables, growing public pressure against them and the possibility of stranded assets. It is imperative that governments end their unacceptable support for fossil fuels and make polluters pay for the negative externalities they cause. Governments must stop funding fossil fuels and phase in a mandatory carbon price for all financial institutions, tightening their scope over time.