As the EU Emissions Trading System (EU ETS) negotiations enter their final stages for the European Parliament and EU Member States, a recent decision by the EU’s top court against steel giant ArcelorMittal’s claim for additional free carbon credits should come as an important signal to lawmakers for the post-2020 period. 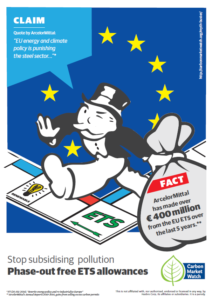 Last month, the European Court of Justice confirmed an earlier ruling that steel giant ArcelorMittal has to return to Luxembourg wrongfully received free pollution permits. The case goes back to 2012 when ArcelorMittal closed its Schifflange site in Luxembourg but still received almost 81,000 carbon permits for free in that year, because it was late in notifying the Luxembourg authorities about the plant’s upcoming closure.

Meanwhile, ArcelorMittal has made more than €500 million from the EU ETS since 2009 according to its own financial reports, by receiving too many free permits and selling them on.

What happened to ‘polluter pays’?

All this comes at a time when EU policymakers are revising the emissions trading rules. To retain at least a trace of the polluter-pays principle, these talks should result in the curtailment of the handouts of free pollution permits to the industry after 2020. Regrettably, a majority of the environment ministers and the European Parliament want to give heavy industry an additional 300 up to 775 million free pollution permits, on top of the already assigned 6.3 billion. The trialogue negotiations are hence likely to result in the continuation of subsidies for Europe’s worst polluters.

Industry doubles down on earlier gains

Steel companies have been particularly successful in their lobby for more pollution freebies, managing to convince Members of the European Parliament that they should receive over-compensation for waste gases in the future. This is counterproductive as it increases, rather than reduces, the number of free allowances to the steel industry. It also contradicts another recent ruling by the Court of Justice on over-compensation for waste gases.

More auctioning of pollution permits and less free handouts will be key to bringing the Emissions Trading System back on track. Encouragingly, Lakschmi Mittal, CEO of ArcelorMittal, has recently suggested introducing a carbon tax “as the best answer on climate change”.

Making also importers to pay for their emissions would ensure that carbon costs are reflected in material prices and generate more public money that can be invested in making European industry the most innovative in the world.

In the absence of a robust EU ETS called for by Carbon Market Watch and others, the EU needs to prepare the way for a variety of adjacent measures that help drive European industries towards a low carbon future.

Discussions between the European Parliament and the EU Member States are set to start on 4 April.