BRUSSELS 30 November 2016. The European cement sector has earned over 5 billion euros from the EU’s Emissions Trading System (EU ETS) according to updated windfall calculations taken from 2008-2015. The findings from independent analysts at CE Delft highlight the urgent need to drastically curb the volume of free pollution permits handed out to carbon-intensive sectors under the EU ETS.

The over generous handouts of free pollution permits under the EU ETS have allowed industries to profit to the tune of €25 billion across the European Union. The cement industry in particular has reaped huge financial benefits from the system that is supposed to disincentivise pollution, not pay for it.

At least three cement multinationals themselves have confirmed in their annual reports that they received payouts of over €2 billion by receiving too many pollution permits for free.

“The findings once again bust open the industry myth of carbon leakage. When high carbon industry gets a free pass to pollute, low-carbon technologies cannot get a foothold in the market. Policymakers must ensure that cement companies pay for their pollution in order to unlock the huge potential for emission cuts within this sector.”

The EU ETS reform provides an opportunity to correct the failings of the system by setting a higher carbon price and moving from subsidising industry pollution to investment in low-carbon innovations. The cement sector is divided on the reform with a split between the incumbent, dominant companies and the low-carbon innovators.

“Without deep reform, the EU ETS will continue to reward the technical status quo instead of driving the transition to low carbon technology. The cement sector is losing valuable time and postponing real changes to its business model. If the opportunity for ETS reform is flunked this time, the sector will have lost the battle to decarbonise by 2050.”

New study by InfluenceMap finds that the industry has engaged in intense lobbying around the EU ETS with the aim to shape it to suit its existing carbon intensive practices.

“It is not surprising the cement sector is choosing to weaken the climate policies that could threaten its current business model. However, they end up undermining the ambition of the whole regulatory process and we think investors should be concerned about the correlation between negative lobbying and companies’ unwillingness to transition.”

Cement companies in 20 European countries profited from the EU ETS in three ways:

The annual reports of LafargeHolcim, Heidelberg-Italcimenti and Cemex show that they have profited by €1,100, €630 and €350 million respectively from the EU ETS. 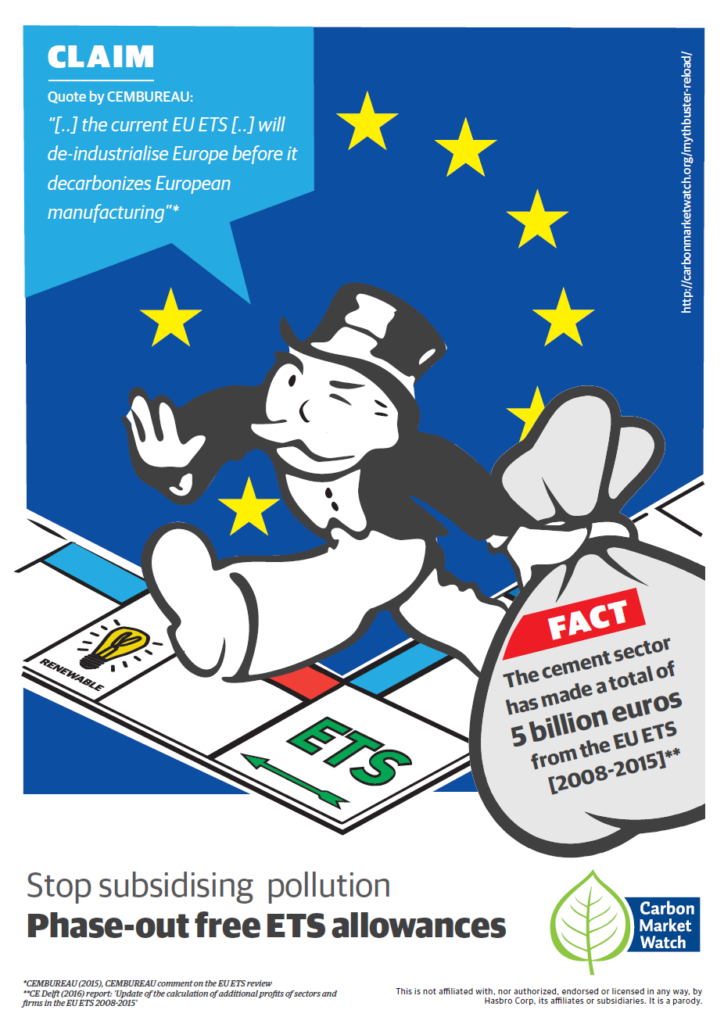