Media advisory: EU climate policy should not be the scapegoat for oversupplied steel market

One of the issues to be raised on European Steel Action Day is the EU Emissions Trading System (EU ETS) – the flagship European climate policy regulating EU carbon emissions from industry, currently under review. The unions fear that additional costs resulting from climate obligations are a threat to European jobs in the industry.

Studies have shown, however, that rather than suffering from it, the steel sector in Europe has made billions from the EU ETS.

“The EU’s emissions trading is not to blame for the industry’s economic troubles. In fact, rather than a burden, the over-generous handouts of free pollution permits have made the system a real goldmine for the sector,” said Agnes Brandt, Senior EU Policy Officer at Carbon Market Watch. “Instead of filling shareholders’ pockets, auctioning revenues from the ETS should be used to support workers in the low-carbon transition.”

As an energy-intensive industry exposed to international competition, the steel sector receives free pollution permits from the EU ETS and is expected to continue to do so under different policy options for the EU ETS reform[i].

According to the data in the EU Transaction Login in Germany for example, iron and steel sectors have so far always been able to cover all emissions with free permits, and with the use of cheap international offsets[ii].

On top of that, the international companies have been able to profit from the system by selling surplus allowances – that they received for free [iii].

Bloomberg analysis shows that the EU steel industry troubles started in 2011 – since then the global steel price has been in decline, with a further halving of the price this year[iv].

“Steel companies in Europe are struggling, and steel jobs are at risk. However, it is not climate policies, but other international factors affecting the price of steel that are responsible for the pressure on European steel manufacturers,” said Ola Mirowicz, EU Climate Policy Adviser to Member States.

“We support a thriving, modern, low-carbon steel industry which can provide high quality jobs while playing a vital role in building innovative low carbon technologies, including the wind turbines which are powering the renewable revolution,” Mirowicz concluded.

[i] For detail on the EU ETS reform options and their impact on the EU and German steel industry see Sandbag’s papers (2016): Last Chance Saloon for the EU ETS and Germany and the EU ETS: Industrial leaders champion a strong EU climate law. 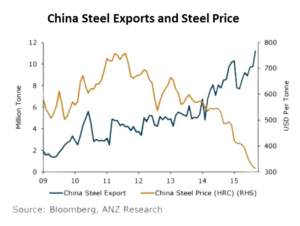