Home » News & Press » Climate finance agreed in Paris will not put the world onto a 1.5 °C pathway

Climate finance agreed in Paris will not put the world onto a 1.5 °C pathway 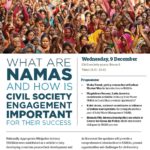 Paris did not come up with a decision to mobilise trillions needed to put the world on a 1.5 C pathway. Developed countries will continue to take the lead in mobilizing climate finance. However, the financial provisions are weak, with most relevant points shoved into decisions.

Finance has been the buzzword of the COP21 negotiations in Paris. Supporting the ambitious efforts to hold the increase in the global average temperature to well below 2 °C above preindustrial levels will require substantial financial support of climate actions and actions, including supporting country-driven strategies. According to an analysis by Carbon brief, developing countries will need USD 3.5 trillion of climate finance just for the implementation of submitted INDCs. However, the financial provisions set in the Paris agreement do not reflect the needs of developing countries and do not provide a clear pathway towards the road to 1.5 °C.

Many final decisions relied on the issue of differentiation between the countries. That means nailing down who will be responsible to provide financial resources to support climate action. Developing countries were concerned with developed countries wish to ‘expand the pool of donors’ to other countries ‘in position to do so’. The final agreement declares that developed countries will continue to take the lead in mobilizing climate finance. However, the USA has assured that the financial commitments in the agreement are not legally binding. In addition, developing countries are now encouraged to provide such support voluntarily.

On the provision of scaled-up financial resources, The Parties once again affirmed the commitment from Copenhagen to mobilise USD100 billion annually by 2020 for mitigation and adaptation. However, instead of setting a clear roadmap of how finance is to be leveraged, the agreement only ‘strongly urges’ developed country Parties to scale up their level of financial support. Moreover, the agreement is missing short-term collective quantified targets set for the scaling up of finance after 2020.  The COP decision provides no further clarity than establishing that new collective quantified goal from a floor of USD 100 billion annually will be agreed before 2025.

Recognizing that the greater part of current finance goes to mitigation, the agreement encourages a balance between adaptation and mitigation finance. However the deal could benefit from separate targets for finance for adaptation, as well as loss and damage.

In order to ensure transparency and consistency of information, the agreement sets a mandate for developing countries to communicate their public financial contributions to developing country every two years. With regards to this, Subsidiary Body for Scientific and Technological Advice (SBSTA) is requested to develop modalities for the accounting of public financial resources for consideration at COP 24, with the process to be initiated at COP22.

The final agreement has left out an important reference to Parties phasing out or reducing support for fossil fuels, which was contained in the previous draft. The financial provisions also left behind reference to gender-sensitive approach.

Climate finance is the key to unlock the ability for developing countries to build resilience against the effects of climate change and reduce greenhouse gas emissions. Countries now need to firstly deliver their promise of securing USD 100 billion annually by 2020 and take greater initiative in scaling up their ambition towards the trillions needed to keep the global warming under 2 °C.