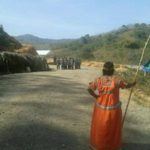 Following the temporary suspension of the controversial CDM hydroelectric project Barro Blanco in February, Panama’s government acknowledges “recurring administrative flaws and improper handling” by the company in charge. After its dismissal, a new roundtable is now convened to analyse how the project can continue under a new management and “in accordance with the well-being of the communities”. The crucial decision to continue financing the project is now up to the German and Dutch development banks.

Following protests by local indigenous population in the Ngobe commarca that have faced oppression and violations of their rights and would ultimately be displaced by the flooding of the Barro Blanco hydroelectric dam – a project registered under the UN’s CDM carbon offsetting mechanism – Panama’s environment agency took a landmark decision in February to temporarily suspend the construction that had already advanced to 90%.

The decision was justified because of non-compliance with national environmental impact assessment requirements, including shortcomings in the agreement with the locally affected indigenous communities.

Following this decision, a dialogue roundtable was set up to discuss the compatibility of the dam with national laws and human rights. It gathered representatives of the Panamanian State and of the local communities, facilitated by the OHCHR Regional Representative for Central America and United Nations System Resident Coordinator for Panama. The demand of the Ngobe indigenous communities was clear: CDM project #3237 must be cancelled.

The government finally acknowledged “recurring administrative flaws and improper handling” by the company in charge, GENISA and decided to dismiss it. However, it also proposed a new “technical” roundtable to analyze how the project can continue under a new management and “in accordance with the well-being of the communities”.

According to the official press release of the Government of Panama, „the pathways necessary to replace the project managers will be managed with the banks financing the project“. The decision to finalise construction of the project and subsequently flood the indigenous people’s territory is now up to the financing banks involved. These include German development bank DEG and the Dutch Development Bank FMO.

As climate finance flows are expected to pass through various channels in the future, the lessons of Barro Blanco must be taken very seriously. To prevent that future climate adaptation and mitigation projects have environmental and social negative impacts, a strong institutional safeguard system that respects all human rights and especially the rights of indigenous peoples is required. The opportunity to establish such a necessary safeguards system is now, ahead of the Paris agreement, and following the Geneva pledge, to put the respect of human rights on top of the UNFCCC agenda.