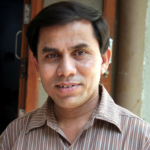 With the results now revealed on who is India’s new Prime Minister, every one focuses their attention on the economic development Narendra Modi promises. But how about his environmental manifesto? All the parties, BJP included, preached a ‘sustainable development’ that would make environmental protection coexists with industrial and economic development but it does not mean that their propositions will actually be efficient? Moreover, most parties pledged a sustainable environment for every Indian citizens and future generations but in practice nothing is done to make sure laws are properly implemented.

Congress is probably the party that had the most elaborated manifesto concerning environmental protection, but measures still seem superficial.

They wanted to bring a bill to set up a National Environmental Appraisal and Monitoring Authority (NEAMA) that would be an efficient agency to recommend Environmental Clearance. Yet this bill has been proposed since 2011 and nothing has been done till now. The proposal was buried within the Ministry even though the Supreme Court had passed an order in 2011, referred to very often as the Lafarge judgment, ordering such an authority. The Ministry’s interpretation remained that it was only a recommendation and not an order of the court.

It also wanted to clean the rivers on a large scale as it is already being done for the Ganga through the National Ganga River Basin Authority. However, cleaning would only be a small part of the work. To make a real difference, measure should be taken to create awareness among people in order to avoid the disposal of waste in the rivers, etc. Furthermore, industries are also major water polluters. Regular monitoring should be set up to make sure the companies respect the environmental laws.

The ‘Green National Accounts’ initiative launched by Congress, although good in intention, would have been hard to put in place since some of the appropriate data is hard to collect, or has not been collected as there was no requirement. Also putting a monetary value on everything from built infrastructure to air quality is a very difficult task that most experts know is not possible to achieve. Therefore, it would have probably remained an ideal.

Regarding the National Action Plan on Climate Change, some experts argue that it will have little impact since climate change is a global crisis and to be efficient, not only India, but every country has to be involved. Also it seems like they expect more from developed countries, holding them responsible for the current situation. This kind of thinking would not solve any of the climate issues.

The Government pledged, under Congress, for protection of the biodiversity of the country and at the same time charging ahead with an aggressive policy to increase coal mining and industrial development that is destroying the environment including the habitat of numerous species. It is also forcing tens of thousands of its own citizens to leave their homes.

Aam Admi Party, which could be called a ‘new-born’ party, the Communist Party of India (Marxist) and the CPI are the three political parties that do not even pretend to care about the environmental issues. In their manifesto, environmental issues are barely addressed.

AAP promotes an ecologically sustainable economy for India but barely mentions its protection. Instead, they simply want access to basic needs such as food and water for all, but this won’t be in any case protecting the environment. It is mentioned that ‘Human and ecological capital are continually enriched’ without saying anything on how to either enrich this capital or promote its conservation.

CPIM in its manifesto fails to mention the protection of wildlife which is threatened by the intensive industrialisation of the country.

In spite all of this; BJP seems to be the party that makes the biggest joke of environmental protection. BJP declares: wanting a better place, a better environment for all, now and in the future. They emphasise the need of a holistic view of human life for a sustainable development. Even though on paper, BJP supports environment protection, practices in Gujarat under the current Chief Minister (prime Minister elect) Narendra Modi, are very different. Many places, especially the coastal area have been polluted by the careless and extensive industrial development. Agencies in charge of environmental protection fail to serve their purpose and do not properly monitor. The proof of this lack of interest is the fact that the Central Pollution Control Board of India declared Gujarat to be the most polluted state in 2010. It is true that pollution started even before Modi, but he has not done much to improve the situation ever since.

As elsewhere in the developing world, this impressive industrial growth has been accompanied by pollution on a large and increasing scale. Air and water pollution, accumulation of solid hazardous waste and land contamination have been a concomitant part. From coal dust and fly ash spewing from Ahmedabad’s cotton textile mills to the dumping of waste products in rivers, woods, ravines and valleys along the Golden Corridor, the environmental degradation has gone largely unchecked.

BJP offers to commit to protection of the Himalayas but neglects conservation efforts in the Western Ghats, wetlands or the wildlife in these areas. The manifesto barely mentions wildlife protection. 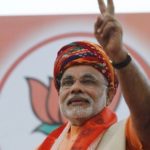 The overall manifesto remains very vague on environmental protection without ever giving concrete measures to implement existing measures, or improve the current situation. BJP wants to frame the environment laws in a manner that provides no scope for confusion and will lead to speedy clearance of proposals without delay, which could make us fear a speedy clearance without real consideration of projects on the environment.

Now that Narendra Modi has been elected on May 20th and delivered a very emotional and optimistic speech, we can speculate on what he will or will not do regarding environmental issues such as Climate Change in the country that is the 3rd largest polluter after the USA and China.

What can be said for sure is that Modi has a way with words; he knows how to mesmerize crowds and announce great and innovative measures. One of them could be the creation of a Ministry of Climate Change, like he did during his mandate in Gujarat, making him one of the first in the world to do so. In this new Ministry, he could transfer the National Action Plan or start is Goddess-given mission: clean the Ganga River.

We saw Modi in action in Gujarat when he was still Chief Minister, he created a CDM cell that turned out to be useless, promoted CDM projects such as state of the art windmills that were destroying land and leaving indigenous people jobless, if not homeless. The local people still do not have access to electricity when we know India has a surplus of electricity generation and Modi boasts to have a surplus of 2,000 MW thanks to these projects.

The true irony lies in the fact that Modi believes himself to be the Indian Al-Gore. He published a book called ‘A convenient action: Gujarat’s Response to Challenges of Climate Change’ in which he actually explains how to make money out of environmental protection. He has been invited by Ban Ki-Moon to attend the Summit on Climate Change in September 2014, my guess is that he will use this opportunity, not only to give Obama his first visit but also to try to appear as a saviour of the environment.

The three main national parties competing in the elections have published manifestos that touch on the environment, but say little about major problems such as worsening pollution or projections that the country will have only half the water supply it needs by 2030. Overall, all the parties superficially mention the question of sustainable development without really giving the means and measures they will set up to protect the environment. No real punitive measures are proposed, they remain very shy in the way to punish polluting industries, even though it would be one of the best measures to deter industrialists from polluting India.

Now that Modi is Prime Minister, we expect him to be friendlier with Mother Nature and become a man of his word.