More energy-intensive industries will pollute for free after 2015 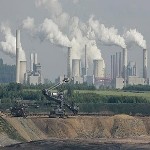 The European Commission has unveiled a list of 175 industries that will receive protection from the costs of climate change policies (“carbon leakage”) up to 2019. Surprisingly more financial support will be handed over to energy-intensive firms, despite there being no evidence for the occurrence of carbon leakage so far.  Carbon Market Watch calls upon the European Parliament and Member States to reject the new list.  Energy-intensive industries should not be allowed to pollute for free and therefore other measures to address carbon leakage should be developed for the post-2020 period.

What is carbon leakage?

Carbon leakage is the situation in which, as a result of stringent climate policies, companies move their production abroad to countries with less ambitious climate measures, which can lead to a rise in global greenhouse gas emissions. The production from sectors that are deemed to be exposed to a significant risk of this “carbon leakage” will get protection by receiving their allowances to emit CO2 for free.

A recent study for the European Commission found that during 2005-2012 there were no occurrences of carbon leakage. On the contrary, some observers have warned of the risk of “green job leakage” i.e. clean tech firms moving overseas because Europe fails to set out ambitious climate change policies that would increase the demand for their low-carbon products and solutions.

Why are so many companies allowed to pollute for free?

To calculate if a company is deemed to be at risk of carbon leakage, assumptions are made about the costs of Europe’s climate policies, and those abroad. It is assumed that the price to emit one ton of CO2 is 30 euros in Europe, even though the price has been much lower -currently around 5 euros- for years. It is also assumed that other countries in the world are not taking equivalent measures to tackle climate change. In fact, many countries are undertaking comparable efforts: China is launching seven regional carbon markets, South Korea is introducing a cap-and-trade system and South-Africa is implementing a carbon tax for example.

What is the problem of companies polluting for free?

When industries pollute for free, the costs of carbon pollution are not reflected in the price of products, while polluters should pay for the damage they cause to others.

Some industries receive their carbon permits for free, but still pass through the opportunity cost of these CO2 allowances (i.e. the price of carbon permits on the market) to their consumers. While the polluter pays in this case, these industries can earn billions of windfall profits at the expense of taxpayers. See also here.

The European Commission published the draft proposal for sectors deemed to be at risk of carbon leakage on 3 May 2014. The Climate Change Committee, a group of Member State experts, will probably vote on this draft list before the Summer break. The draft Decision will then be sent to the European Parliament and the Council for the compulsory three-months scrutiny, during which time parties can object to the measure. Carbon Market Watch recommends the Parliament and the Council to reject the new carbon leakage list and requests the European Commission to propose a new list based on up-to-date parameters including a realistic carbon price so industries not at risk of carbon leakage are excluded.