Barro Blanco: A call for CDM reform from those directly affected (Watch This! #6)

Last month, the UN climate talks concluded in Bonn, Germany. Despite the SBI roadblock presented by Russia, Belarus and the Ukraine, there were a few highlights. As a result of our collective efforts, for the first time in the history of the CDM, Parties had an open dialogue about the human rights impacts of the Clean Development Mechanism (CDM).

During the workshop on the review of the CDM Modalities and Procedures, one delegate openly asked “what are the human rights concerns with CDM projects?” opening the door for civil society organizations and community members to raise our concerns. We reminded Parties of their obligations to “fully respect human rights in all climate change related actions,” and then provided concrete examples of CDM projects that fail to meet human rights standards.

Formal UN Investigations needed
Twelve civil society organizations, including CIEL and Carbon Market Watch, have sent letters to the United Nations (UN) Special Rapporteur on the Rights of Indigenous Peoples and the UN Independent Expert on Human Rights and the Environment urging them to conduct formal investigations into the human rights impacts of the Barro Blanco dam located on the Tabasará River in Panama.

Directly impacted but not consulted

Indigenous Ngӓbe leader Weni Bagama – whose community is directly impacted by the Barro Blanco hydroelectric dam on the Tabasará River in western Panama – delivered a powerful statement during the discussions on stakeholder consultation. Weni described how the project has already affected the lives and livelihoods of the Ngӓbe peoples. Once fully constructed and operational, the dam will flood religious, historical and cultural sites in the Ngӓbe-Buglé territory and convert the river into a stagnant lake ecosystem, affecting the Ngäbe’s diet and means of subsistence. 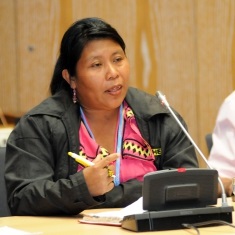 Most significantly, Weni called attention to the fact that she and her community had never been consulted. CDM rules require investors to consult with local stakeholders and to take their comments into account during the registration process. However, as Weni described, the company did not give notice and did not consult the Ngäbe communities regarding the Barro Blanco project and its impacts. Despite concrete evidence that the Barro Blanco project violated CDM rules on stakeholder consultation, the CDM Executive Board registered the Barro Blanco as a CDM project in 2011.

The current review of the CDM Modalities and Procedures provides a critical opportunity for reform in the CDM. Weni’s testimony served as a wake-up call for delegates, who are slowly recognizing why human rights protections are needed, specifically international safeguards to protect the rights of affected communities and a means for communities to seek recourse for environmental and human harms associated with CDM projects as in the case of Barro Blanco. 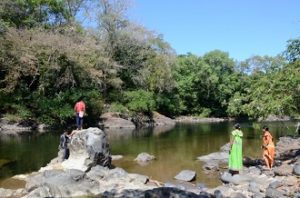 Joint Submission on Human Rights in the CDM

As part of the review of the CDM Modalities and Procedures, CIEL, Carbon Market Watch, AIDA, International Rivers, Earthjustice and 25 NGOs more from around the world urge the SBI and CMP to:

Read more from Watch This! NGO Voices on Carbon Markets # 6