Carbon Market Watch was in Doha to advocate for fair and ambitious climate solutions. Our main message for the climate negotiators was simple and clear. First and foremost countries must dramatically increase their pledges now to reduce emissions. Otherwise we will not stand a chance to prevent catastrophic effects of climate change.

We worked hard to help increase environmental integrity in carbon markets. We raised awareness about how short-sighted decisions can render mitigation efforts ineffective for many years to come. Below is a short summary of the events and actions that Carbon Market Watch was involved in at Doha: 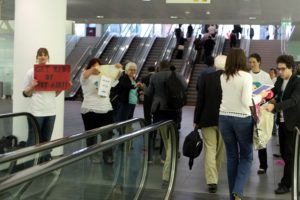 During the second week of COP18 Carbon Market Watch organized two actions to urge delegates to tackle the issue of AAU surplus, commonly called “hot air”. If left unaddressed, it would seriously undermine environmental integrity in the second commitment period of the Kyoto Protocol. Carbon Market Watch organized a media action, where COP18 participants were given fake carbon credits notes and were invited demonstrate throwing them in a garbage bag to show their commitment to getting rid of the hot air. 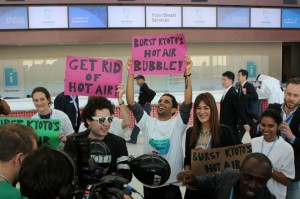 The second action saw representatives from Parties’ delegations, the European Parliament, environmental NGOs and Least Developed Countries bursting balloons representing 1Gigatonne of CO2 and giving statements on the urgency of addressing the AAU surplus issue during COP18. Both actions were a great success. They helped raise public awareness on one of the most complex and controversial issues during the climate negotiations and helped increase pressure on negotiators to eliminate Kyoto’s hot air.

Side-event: Conquering the Phantom Menace: Solutions to the Kyoto Surplus 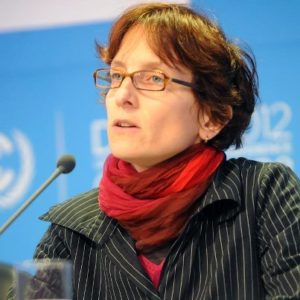 Carbon Market Watch organized a side event in Doha which gave a political and technical overview of the Kyoto surplus issue. It featured the findings of a new study by Climate Analytics that shows the impact of the surplus on climate commitments. Members from the South African and Swiss delegation explained the G77 and Swiss proposals to minimize the impact of the surplus. The subsequent discussion focused on how to move beyond the current political and environmental impasse.

More information about the event can be found here. 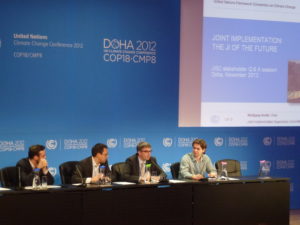 At COP18 in Doha, members from the JI Supervisory Committee (JISC) gave a presentation on JI and its future and answered questions from the audience. Together with NGO colleagues from Ukraine, Carbon Market Watch asked the JISC members how they will ensure the environmental integrity of a future JI, since the JI’s track record has been rather poor. Countries such as Ukraine and Russia have been issuing millions of JI credits with virtually no integrity or climate benefits. You can watch the webcast here. 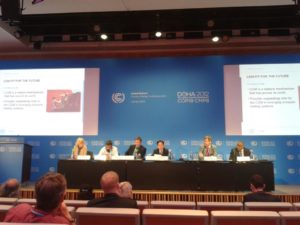 Members from the CDM policy dialogue panel and their research team presented the outcome of their final report “Climate change, carbon markets and the CDM: A call to action. Report of the High-Level Panel on the CDM Policy Dialogue”. Carbon Market Watch asked questions on why some of the findings of the research team on additionality concerns were not included in the final report, on whether the CDM policy dialogue panel also made a comparative assessment with other policy tools and on which basis the creation of a stabilization fund was recommended. You can find more information here and watch the webcast here.

Side-event: Luxury or Necessity: A Framework of Various Approaches Under the UNFCCC (FVA)

Carbon Market Watch participated at the side event organized by the Centre for European Policy Study on a potential model for an FVA, in order to ensure coherence between the various approaches that are emerging, under the UNFCCC, and at national and regional level. At the event objectives, functions, components & operation for this FVA model were discussed. Carbon Market Watch’s contribution focused on providing an overview of key issues, including consistency of standards between the FVA and NMM; and the need for a transparent common accounting framework. For more information, see here.

Together with the Centre for International Environmental Law and various other organisations, Carbon Market Watch organized a side event on advancing human rights in the context of carbon markets. We had five powerful presentations from panellists speaking about the human rights impacts of climate change, of community response measures and what more is needed to protect human and indigenous rights. For more information about the event, see here.