NGO Roundtable on the CDM in Chile (Watch This! #2)

On July 18 CDM Watch and Collectivo Viento Sur organized a civil society roundtable at the Heinrich Böll Foundation in Santiago to discuss about the CDMs performance in Chile and new market mechanisms. During the roundtable, Eduardo Giesen and Diego Martinez-Schütt presented case studies and exposed problematic aspects of related national and international policies such as perverse incentives and their impacts on sustainable development. 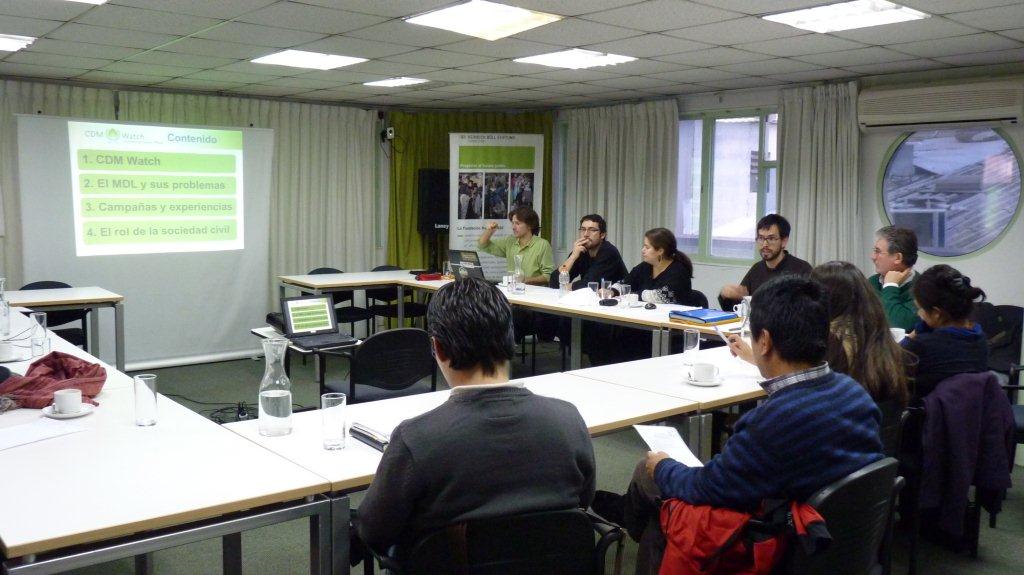 Various Chilean case studies illustrate the undesirable effects inherent to the current design of the CDM such as the lack of additionality, impacts on legal reform, the strategic use of CDM and practices of beneficiary companies that are not compatible with sustainable development.

With 120 CDM projects in the pipeline, Chile is the third Latin American country, after Brazil and Mexico, with the highest number of projects in the region. In Chile all CDM projects are medium or large scale. Additionality in medium and large projects is highly questionable, since the level of investment of these projects is typically very high. It can be thus assumed that these projects were already planned and that the benefits of the CDM were not a decisive factor in the decision to proceed with the project. For example, the Chacabuquito hydroelectric project is very similar to others that have been developed without CDM financing. In Chile there are 60 run of the river hydroelectric plants operating and another 96 projects of this type in the pipeline (see http://www.centralenergia.cl/). The Alto Maipo project  has a projected capacity of 272 MW. Considering the current price per ton of CO2 reduced, at a total investment cost of $ 700 MM, the sale of carbon credits cannot be considered relevant in making decisions on its implementation.

Businesses are incentivized to use their influence to delay the enactment of environmental standards or laws governing pollution permitted in a particular activity or area. Because CDM operation is voluntary and credits can only be claimed if emissions are reduced beyond national legislation, it is convenient for the project owner to push for weaker or down-regulations.

During the roundtable, participants also discussed about the case of landfills and methane recovery projects in Chile. A mandatory standard for the treatment of methane was going to be implemented but the landfills had benefited from the CDM and the application of the standard has therefore been delayed. Today it remains a voluntary action of companies. Examples of landfill projects benefiting from CDM are Lepanto Landfill, El Molle, Copiulemu, Biogas Chile Investment, among others.

A strategic use of the CDM could be observed in Chile, where CDM certification is often used to promote the environmental practices of certain business or sectors as sustainable and this remains in the collective imagination of the people. However, the company only undertakes environmentally friendly action under CDM schemes. Agrosuper, for example, registers a CDM project based on the recovery of methane in liquid waste in 5 plants.  However, it does not re-apply these practices, as we had witnessed with the conflict that occurred in Freirina in May 2012 due to the release of toxic gases from the pig farms.

Participants also discussed the coexistence of CDM and unsustainable practices. At this point the mechanism has an evident flaw with regard to other certification mechanisms since monitoring only occurs for the reduction of GHG but not for social and environmental impacts. Moreover, although a given project may not have adverse effects or contrary to those desired, there are cases where the beneficiary company is widely criticized for its environmental and social impacts in its practices outside the project. For example, we are reminded of the company Arauco and implementation of CDM projects related to energy production from biomass, coexisting with a high degree of social conflict in the area, at the same time with the loudest environmental conflict of Chilean history, the death of the swans in Valdivia.

Finally, roundtable participants, mostly belonging to NGOs stated that it’s unreachable for small businesses or communities in monetary terms to complete efforts for the development of a CDM project. In addition, the ton of CO2 is currently very cheap and, in the words of a potential project operator present at the roundtable, there are currently no incentives for their development.

It was noted that in Chile, the experiences related to CDM projects account for problems of design and implementation, of large barriers for small projects and that future prospects are likely to be slim at least in the Chilean context. Finally, we concluded that the mechanism should be revised or replaced by a mechanism that promotes the shift to clean technologies effectively and directly, where additionality is not a matter of constant concern.

The Colectivo Viento Sur is a multidisciplinary organization that supports the construction of a sustainable and sovereign society. The organisation has a horizontal structure that takes transversal actions and works in a holistic manner in the territories across Chile.  See: http://colectivovientosur.wordpress.com/