This week, UN climate negotiators are meeting in Bonn, Germany, to try and find common ground on the Paris Agreement’s market provisions. There is growing political momentum to move beyond offsetting in global climate policy, but only a handful of countries around the negotiating table are willing to walk the talk. “We can no longer…

UN carbon markets – what to expect from Bonn?

On Earth Day 22 April 2016, world leaders were in New York to sign the Paris Climate Change Agreement. Two years on, governments are working on the rulebook to put the historic deal into practice. Ahead of the Bonn Climate Change Conference, we take a look at the Paris Agreement market provisions and lay out…

On Kyoto, Paris, and carbon markets

In less than two weeks, Parties will meet again in Bonn at a UN climate conference for another round of negotiations to prepare for the adoption of the rules to implement the Paris climate change agreement. What role will markets have in how the world works to limit global warming to 1.5C?   Although observers…

Executive Summary Putting a price on carbon, based on the polluter pays principle, has the potential to be a powerful policy tool to reduce greenhouse gas emissions in the fight against climate change. A carbon price can come in the form of a tax or a cap and trade system. With a tax, the price of polluting… 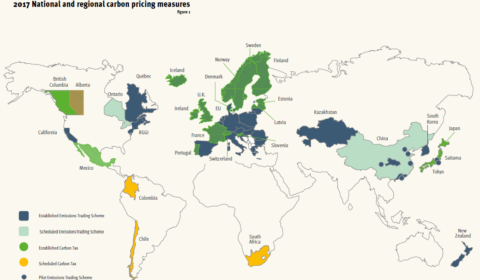 In the days of Trump, Irma, Harvey, Talim and Doksuri, it is important to have positive signs that people can also work together, especially on climate change. The tenth anniversary of the International Carbon Action Partnership (ICAP) on 1 September 2017 was one such occasion. One must hope that the gathering gave policymakers renewed ambition…

The Future of Californian Carbon Pricing after 2020

California is currently debating the future of its cap and trade program, which will play an important role in reaching its climate goals. The future of the system is controversial, but there have been a couple of important key reform proposals made by members of the California legislature, notably State Sen. Bob Wieckowski (D-Fremont) and…

Recommendations for Article 6 of the Paris Agreement

Prepared for the Bonn Climate Change Conference 8 – 18 May 2017 Carbon Market Watch welcomes the opportunity to provide input to the discussions on matters relating to Article 6 of the Paris Agreement. Years of stalled negotiations leading up to Paris Agreement unexpectedly delivered a strong provision for markets in the Agreement’s Article 6,…